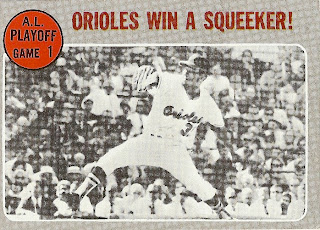 I'm going to acknowledge up front that I'm gaming the time on this one a bit. It's not being posted until 12:30 AM on Saturday, but it's going to count for Friday. This card commemorates Mike Cuellar's strong performance in the first-ever American League Championship Series game on October 4, 1969. He pitched eight innings, allowing three runs (two earned) on three hits and a walk while striking out seven. However, he left trailing 3-2, as his counterpart Jim Perry had been up to the task for the Twins. Perry began the ninth inning looking for a complete game victory, with the only blemishes on his slate being solo home runs by Frank Robinson and Mark Belanger. (Yes, Mark Belanger.) But the longball proved Perry's undoing, as Boog Powell tied the game with a leadoff homer in the bottom of the ninth. A Brooks Robinson single chased the Minnesota starter, but Ron Perranoski held the line and the game went into extra innings. In the twelfth, Perranoski's fourth inning of work, he finally cracked. Belanger eked out an infield hit, Andy Etchebarren bunted him over, Don Buford moved him to third with a grounder, and Paul Blair dropped a bunt single to plate the winner. It was indeed a squeaker...that's e-a, not e-e. You'll have to indulge the English major in me.
Posted by Kevin at 11:57 PM

Talk about your small-ball, Belanger scores the game winner with the ball never leaving the infield in the 14th. Belanger advancing from second to third on a grounder to short, then scoring on a two-out bunt hit by Blair. Great stuff!!

Belanger was the offensive catalyst...home run and a game-winning run after reaching on the infield hit. Go figure.