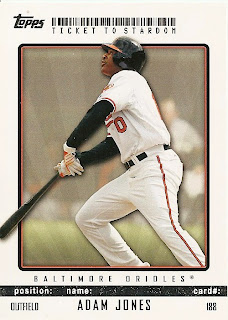 I know that I just wrote about Adam Jones a week ago, but it would be criminal to ignore what he did today. With the Orioles having celebrated their return to the .500 mark by losing each of the first five games of a six-game West Coast road trip, often in a sloppy and punchless manner, the team's center fielder took it upon himself to deliver a win in an afternoon getaway game in Seattle.

The big stories heading into today's game were the season debut of pitcher Brian Matusz and Nick Markakis' big league debut at first base - and to a lesser extent, the end of the illustrious Jake Fox Era. While Matusz had a very encouraging start (1 ER, 4 H, 5.2 IP, no decision), he got a little help from Jones. With the game tied 1-1 in the bottom of the fourth, Miguel Olivo led off with a towering drive to deep center. Adam ran back to the fence on a dead sprint, leaping and catching the ball over his shoulder as he planted his feet against the wall. Despite the impact, he held on and did a bit of a backwards somersault for the icing on the cake. See for yourself. Two innings earlier, he almost cut down Olivo at the plate, but a rare miss by Matt Wieters allowed the lone Mariners run to score. Jones also singled in two of his first three at bats, but was stranded both times. He finally got tired of waiting around on the bases, crushing an upper-deck home run to left field in the eighth inning to deliver the go-ahead run. It held up, as the O's salvaged something from this miserable road trip with a 2-1 victory.

As much fun as the Adam Jones Show is, I'd like to see some of his teammates join the party when the Birds host Toronto this weekend.
Posted by Kevin at 10:25 PM