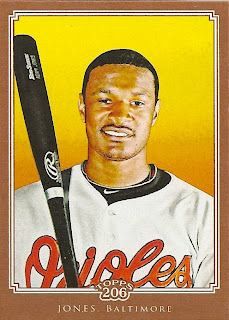 Last night I had the pleasure of attending the third annual MASN Orioles' Blogger Night at Oriole Park at Camden Yards. You can read about my previous experiences here and here. We had a smaller group this year, probably because it was a weeknight and a handful of the best O's bloggers are from far-flung locales like New York, North Carolina, and Atlanta. But it's always good to see familiar faces like Stacey and Mark (Camden Chat), Anthony and James (Oriole Post), and Daniel (Camden Crazies). I also got to meet Jon from Camden Depot.

There were some new MASN folks in charge of the event this year: Jim Buckle and Lindsay Rykiel. Both did a fantastic job keeping things running smoothly, and helped keep things fresh for those of us who had been there before. We were able to hang out right on the field during batting practice, taking in the sights and sounds while the O's took their hacks. There was an athletic-looking guy in t-shirt and shorts standing nearby, and I spent a few minutes racking my brain to figure out where I'd seen him before. Much to my satisfaction, I soon correctly identified him as Rams wide receiver (and ex-Raven) Mark Clayton. He was there as a guest of Adam Jones. Local reporters such as Peter Schmuck, Mark Viviano, and Pete Kerzel chatted with the coaches and Buck Showalter. Here's a few pictures: 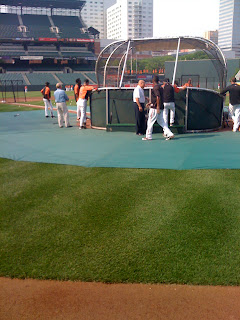 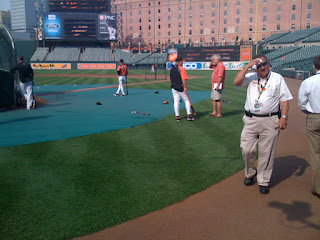 Above: Buck chats with the Baltimore Sun's Peter Schmuck 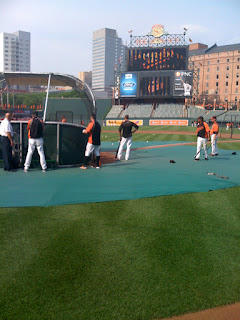 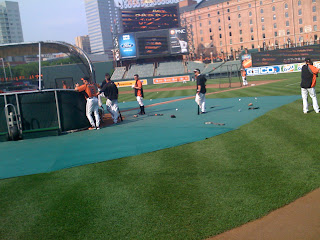 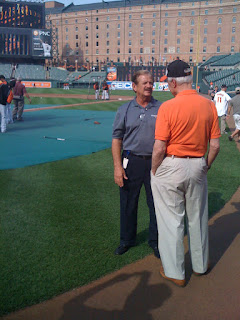 Above: Rick Dempsey chats with a fan. Actor Ed Harris, who threw out the first pitch, warms up in the background in a #11 jersey.

Another new (and exciting) part of last night's itinerary was a Q-and-A with Adam Jones. He was candid and engaging, giving thoughtful responses to our questions even though he's probably heard them all before. Highlights:

-I knew that San Diego was his hometown, so I asked if he had spent much time in Coronado, where some friends of mine live. He was adamant that he doesn't really go down there; I'd forgotten that it's more of a hoi polloi sort of place, just because my friends are sort of fish out of water there. But he met me halfway, noting that he did play games against Coronado High School. He also mentioned a breakfast place near Balboa Park that he liked but couldn't remember its name.

-I asked about his favorite road city: Chicago, for the food and the attractions and cleanliness. He doesn't like playing in Oakland, especially since the ballpark is "like the Grand Canyon". He also mentioned that it sucked to go to Cleveland and Detroit, neither of which offer much night life.

-I wanted to know if there were any pitchers Adam dreaded facing. He's relieved that Roy Halladay is gone from the American League East.

-I also asked whether he heard from players on other teams after his amazing catch last week in Seattle. Adam said that he got some text messages that night, and that a lot of the Toronto players were complimenting him during the following series in Baltimore. I think those were all of the questions I had. Some of his responses to others:

-His approach to Twitter: "I don't get too personal...I always think, 'is this something I want my Mom to see?'".

-Stacey asked why the O's outfielders had stopped doing their jump celebration. It turns out that Jones had a habit of landing on Felix Pie's feet, and Felix didn't like having 220 pounds come down on his toes. So after a recent win, Felix audibled to a group hug and they just went with it. The man is too entertaining for words.

-What was his Draft Day experience? He didn't have a big party like all of the draftees they showed on television Monday night. He was in his high school government class.

-How does he pass the time on flights? Depends on where they're going. "Longer flights mean more booze." He clarified that they only drink when they're headed out of town, since they're all getting in their cars when they get back to Baltimore. Wise choice. He also plays cards, listens to music, and watches DirecTV (especially National Geographic - he likes "I Survived").

-Adam isn't really on guard when he's out on the town. He doesn't mind signing autographs or saying hello to fans, just don't bother him while he's eating. Reasonable enough.

-He hasn't ever gotten on Buck Showalter's bad side, and doesn't plan on it in the future. "Do you want me to get in trouble?"

When we wrapped up the session, he shook hands with each of us. I thought that was a cool thing to do. 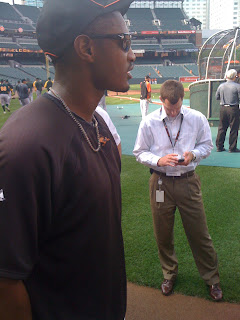 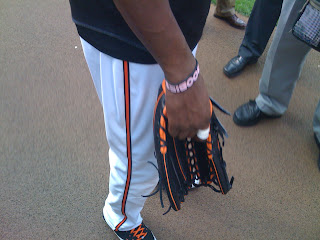 No one thought to ask Adam about his "I Love Boobies" bracelet. I assume it's for breast cancer awareness, but either way, more power to him.

Next we got to watch Jim Hunter and Rick Dempsey prepare for the MASN pregame show, and we had time for a few questions. Jim carries a messenger bag stuffed to the gills with draft almanacs, stat books, and media guides every time he goes to the park. Both men have earpieces, and they deal with producers talking in their ears on a regular basis. 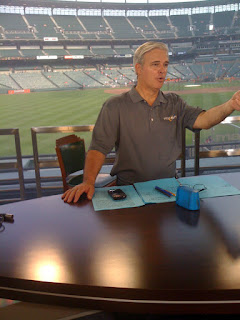 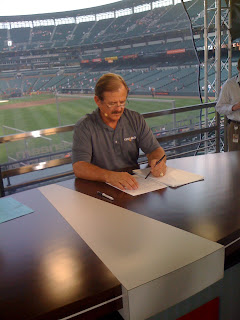 Next we traveled up to the broadcast booth. Unfortunately we were running a bit late, so Gary Thorne was off grabbing a quick bite to eat before he had to go on air. But Mike Flanagan was kind enough to interrupt his own pregame meal to chat with us. He talked about the importance of letting the game dictate the conversation, as opposed to forcing in your own prepared talking points. He also offered a few anecdotes from his career. He said that the only time he was ejected from a game was in 1991, when  an impatient umpire called him for a balk in a tie game. Mike claimed that the umpires had a flight to catch, and one of them was checking his watch. By the way, his memory was pretty spot-on. 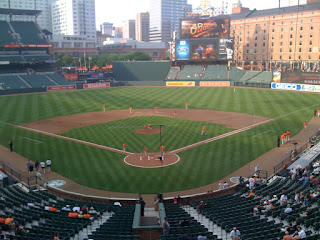 The view from the broadcast booth. 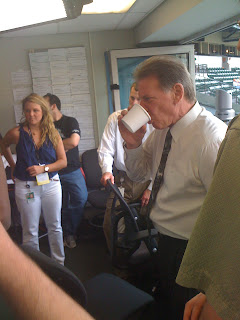 An anecdote from Flanny's early broadcasting days: Indians pitcher Chad Ogea (pronounced Oh-jay) is warming up. Mike says, "They've finally got Ogea in the 'pen". As the words are coming out of his mouth, he's certain that he's crossed the line, but it starts snowballing. "I bet the glove doesn't fit." Fortunately, the old lefthander didn't get himself run out of the booth for his take on current events. 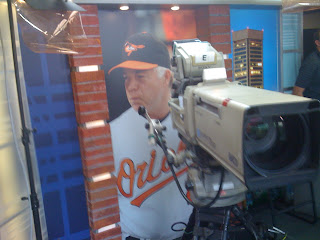 The backdrop in the booth.

I would like to tell you that I beat the 90-degree heat by watching the game itself from the comfort of the fully furnished and air-conditioned MASN suite, but I just couldn't separate myself from the action. I sweated it out in the balcony seats in front of the suite, but I was certain to help myself to a few cold beers and some crab cakes, chicken wraps and tenders, and cookies. By perching out in the box, I also missed a drop-in by Joe Orsulak, but he was kind enough to leave behind some autographed postcards for all of us.

The game exceeded my expectations, with spot starter Chris Jakubauskas teaming up with relievers Clay Rapada, Jeremy Accardo, and Koji Uehara to shut out the Athletics on five hits in a tidy two and a half hours. Jakubauskas' story is a good one. The 32-year-old spent the first five years of his pro career riding buses in the independent leagues, playing for storied franchises like the Florence Freedom, Ohio Valley Redcoats, and Fullerton Flyers. He appeared in 35 games for the Mariners in 2009, going 6-7 with a 5.32 ERA. In his first start for the Pirates in 2010, he was injured by a Lance Berkman line drive to the head four batters into the game and missed the rest of the year. This was his first big league start since, and he got the win with a career-high five strikeouts. There was a moment when it looked like he might get hosed out of a win, as another comebacker hit him in the leg with two outs in the fifth inning. But he shook it off and completed the inning on the next pitch.

The name of the game for the O's hitters was power. J. J. Hardy, batting leadoff for the first time in his career, made like Rickey Henderson and hit the second pitch he saw for a home run to give Jakubauskas an early lead. He also played some smooth defense, as did the rest of his mates in the infield. The slumping and banged-up Luke Scott hit one of the most impressive home runs I've ever seen in person, a towering shot that arced so high that A's right fielder David DeJesus was camping under it with his glove extended even as it was soaring over the out-of-town scoreboard, clearing the flag court and landing on Eutaw Street. It was Luke's sixth career home run to land out on the concourse, surpassing Rafael Palmeiro for a Camden Yards record. A third solo homer came from Adam Jones, who showed off for us bloggers with a 3-for-4 night. The last run came on back-to-back doubles by Luke and Mark Reynolds in the seventh.

Well, I've prattled on long enough. Thanks to Jim, Lindsay, Adam Jones, Jim Hunter, Rick Dempsey, Mike Flanagan, and everyone else who took time out from their regular jobs to make a few small-time bloggers feel appreciated.
Posted by Kevin at 10:53 PM

I've just discovered this blog recently--I'm in. Thanks for further fueling my O's obsession!