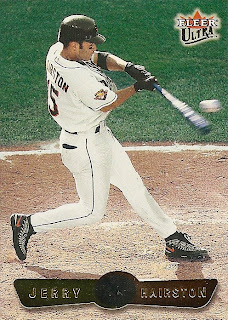 There's no better day than Father's Day to feature Jerry Hairston, Jr., one of the rare third-generation major leaguers. One of the first things that comes to mind when I think about my own father is sacrifice. Over the last three decades, my dad has done lots of things that were probably less than enjoyable or pleasant for him, but he selflessly put the needs of me and my sister ahead of his own interests. When I was eight years old, he took me to a Teenage Mutant Ninja Turtles "concert" at the Baltimore Arena. That act alone probably qualifies him for sainthood. When I got my first summer job at Bengie's Drive-In Movie Theatre, I didn't have my license yet. So every night, he would make the 10-minute drive up the street to pick me up from work...usually after midnight. Speaking of driving, he drew the short straw and had to go riding with me when I got my learner's permit. The first time we drove together, I jumped a curb and blew out a tire, bending the rim. I can't imagine the patience it took a) to not throttle me right on the spot and b) to get back in the car with me after that incident. A few summers ago, Dad even accompanied me to a WWE live wrestling event at Frederick's Harry Grove Stadium. Even in my adulthood, he hasn't stopped going out on a limb for me. Happy Father's Day, Dad, and thanks for all you've done.
Posted by Kevin at 2:37 PM