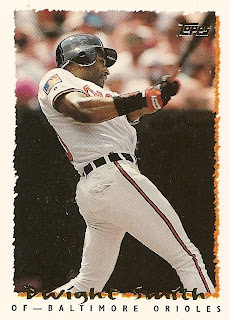 Major League Baseball and its clubs kicked off the Rule 4 Amateur Draft last night, and I'm happy with the Orioles' fourth-overall choice of high school beast Dylan Bundy, for whatever that's worth. I realize these things are a crapshoot, but I'll take my chances with a kid who can hit 100 mph at age 18 with a 158-to-5 strikeout-to-walk ratio. Add in the fact that his big brother Bobby is currently 6-3 with a 2.73 ERA at the Orioles' single-A Frederick affiliate, and you've got a great story.

Of course, the draft is also an annual reminder of the relentless passage of time. The high school seniors being picked this year are a full decade younger than yours truly. In a pre-taped profile of A's first-rounder Sonny Gray, it was mentioned that he had starred in a school production of "High School Musical". This is a new and scary generation, I said, shaking my fist impotently at the young hooligans loitering in my yard. It really hits home when I hear the names of players I grew up collecting...only there are "juniors" appended. Last year it was Delino DeShields, Jr. getting the call from the Astros. Yesterday evening, the Yankees used a first-round "sandwich pick" (51st overall) to select Dante Bichette, Jr. Just two picks later, the Blue Jays picked up another high school outfielder, Dwight Smith, Jr.

For what it's worth, Li'l Dante was considered a reach at #51, with such lovely descriptors as "real power", "lacks quickness", and "a whole lot like what Shelley Duncan brought to the table" (ouch!). Smith, whose pops hit .311 in a 28-game stint with the Orioles in the strike-shortened 1994 season, has been called a "pure hitter" and a "physically-stronger" version of his dad, which is all you can ask for, right? Of course, Smith the Elder was renowned for his lovely singing voice, and baseball card copy writers loved to mention his occasional pregame renditions of the Star-Spangled Banner. No word on whether Dwight Jr.'s pipes measure up to the old man.
Posted by Kevin at 3:27 PM