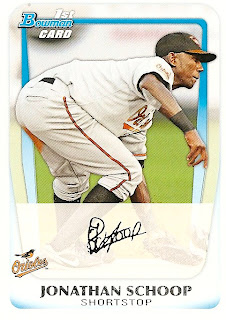 As with most minor leaguers that Bowman features, Jonathan Schoop is probably several years away from the majors. But he's also a rarity in the Oriole farm system: an international prospect. Schoop (pronounced Scope) was born in Curacao, which is best known by baseball fans as the native country of outfielder Andruw Jones. He began his pro baseball career with the Birds' Dominican Summer League team in 2009, and performed well stateside last year at age 18. He hit .290 overall at three levels, most notably carrying a .316 average with 11 doubles in 39 games at rookie-level Bluefield. The back of this card tells me that he has a strong arm, without which he probably wouldn't be playing much shortstop. Of course, nothing is etched in stone, and Jonathan has further enhanced his value as a player by logging time at second base, third base, and the outfield. After hitting .316 with a .376 on-base percentage and .514 slugging percentage in 51 games at low-A Delmarva this spring, he was recently promoted to high-A Frederick, where he will continue playing all over the field. (Last year's #1 pick, Manny Machado, will get most of the innings at shortstop.) So far he's holding his own as one of the youngest players in the Carolina League, hitting .289 through his first 11 games with 7 runs scored and 4 driven in. ESPN's Keith Law, whose judgment I trust on these matters, has said that he's getting some early consideration for next year's Top 100 Prospects list. I suppose eventually my first reaction when an Oriole minor league position player gets national attention won't be surprise, but for now I'll just accept it as a happy accident.
Posted by Kevin at 8:06 PM