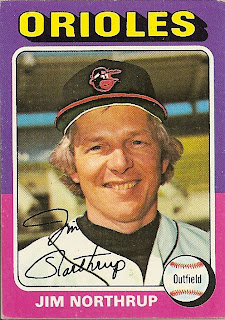 No one likes writing downer posts, but I've noticed that three old Orioles passed away in recent weeks and tribute should be paid.

Most recently, Jim Northrup died on Wednesday at age 71 after struggling with rheumatoid arthritis and Alzheimer's Disease in recent years. He was best known for his decade-plus with the Tigers, particularly his heroics in Detroit's 1968 championship season. That year, he hit 21 homers and drove in a career-high 90 runs, and knocked in another 8 in the World Series. Seven of those RBI came in the final three games of the Fall Classic, as the Tigers fought back from a three games-to-one deficit to unseat the Cardinals. His grand slam in Game 6 blew the contest open, giving his club an 8-0 third-inning lead.

He finished his career in Baltimore, going 4-for-7 with a pair of walks in late September 1974 after being purchased from the Expos. He came back in 1975 to serve as a part-time outfielder and pinch hitter, and had a solid .273 average in 84 games. He excelled in the pinch hit role, putting up a .391 AVG/.484 OBP/.652 SLG in 31 plate appearances. On April 26, 1975, Northrup pinch hit for Mark Belanger with two outs in the bottom of the ninth, runners on the corners, and Cleveland leading the O's 2-1. The 35-year-old veteran delivered a single to score Ken Singleton with the tying run, and one batter later Al Bumbry completed the comeback with a walkoff single.

Like Northrup, Jim Pyburn also succumbed to Alzheimer's Disease recently. He passed away on May 21 at age 78. Pyburn was one of the early "bonus baby" amateur signings, a football and baseball star at Auburn University who inked a $48,000 deal with the Orioles in 1955. Because of the major league rules at the time, he was forced to remain on the big league roster instead of developing at his own pace in the minors. He played third base and center field for Baltimore from 1955-1957, struggling to keep up with the top pitchers in the sport. He had a batting line of .190/.275/.272, totaling only 3 homers and 20 RBI in 333 trips to the plate over those three seasons. After spending a chunk of 1957 and all of 1958 back in the minor leagues, he walked away from baseball and returned to Auburn as an assistant to football coach Vince Dooley. He spent nearly two decades on Dooley's staff at Auburn and then the University of Georgia, working with defensive players. An O's highlight came on June 11, 1957, when his two-run homer off of Billy Hoeft broke a seventh-inning 1-1 tie. The Orioles went on to win 4-1.

Former righthanded pitcher Duane Pillette lived a long and productive life, finally leaving this world on May 6 at age 88. He spent parts of 8 seasons (1949-1956) with the Yankees, Browns, Orioles, and Phillies. His career started late because he went to college at Santa Clara University and then served in World War II. He started and finished the final St. Louis Browns game, taking a tough 11-inning loss by a 3-2 score on September 27, 1953. He also went the distance on April 14, 1954, earning the Orioles' first-ever win by a 3-2 score over the Tigers. Despite a lackluster 10-14 record that year, his 3.12 ERA and 1.26 WHIP were the best marks on the Baltimore staff.