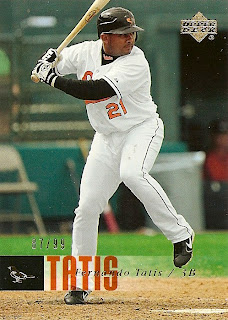 Yep, Fernando Tatis was an Oriole. I'm all about celebrating the guys on the fringes of the major leagues: the quadruple-A types, the formerly solid performers fighting against the tide of injuries and age, the career minor leaguers who get a taste of the good life when a team catches itself short-handed. Naturally, being a fan of a team that seems to be perpetually adrift, I get exposed to plenty of fringy baseballers.

Fernando didn't play at all in 2004 or 2005. But he got involved with the building of a church in his native Dominican Republic, and decided to attempt a comeback in 2006 to raise money for the project. The Orioles signed him to a minor league deal, and he started the season at AAA Ottawa. He hit .298 with a .372 on-base percentage in 90 games with the Lynx, and the O's promoted him to the big leagues in July. In his first start in over three years, he went 2-for-4 with a double, an RBI, and a pair of runs scored. A week later, he singled and homered against Randy Johnson. Though he played sparingly, he spent the rest of the season in Baltimore, and did well enough, hitting .250/.313/.500 with 2 homers and 8 RBI in 64 plate appearances. 9 of his 14 hits went for extra bases.

If pitchers were allowed to return to a game after being relieved, and Chan Ho Park was replaced after giving up the first grand slam to Tatis, and the Dodgers used up all of their pitchers in the inning before bringing back Park to pitch and him consequently giving up the second Tatis grand slam, THAT would make more sense than what actually happened. What the hell was Park still doing on the mound? I will never figure that out.

Looking at the play-by-play, it doesn't appear that Park was being rocked. Sure, he didn't help himself with 2 walks and a HBP, but the pitcher's sacrifice bunt where the Dodgers got noone out, followed by the error on the next batter means that Park got 4 outs that inning but was still having to pitch. In the end, he was only charged with 6 ERs (out of the 11 that scored that inning) - and if the Dodgers can make a play on that sacrifice (and the error), they only actually give up 5 runs.