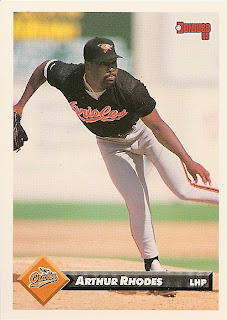 Aaand as promised, here are the ex-Orioles muddling along with other American League teams in 2011.

-Gustavo Molina, C, Yankees: .167/.167/.333. He had a double in six at-bats in April, but is currently taking in the glorious sights and sounds in Scranton/Wilkes-Barre.

-Matt Albers, RP, Red Sox: 1-3, 3.86 ERA, 1.38 WHIP. Hey hey hey, it's Faaaaat Albers! The hefty righty actually has had a good season except for a blowup against the Cubs in which he allowed six runs (five earned) without retiring a batter.

-Rich Hill, RP, Red Sox: 0-0, 0.00 ERA, 0.75 WHIP. Boston turned the erratic pitcher into a lefty specialist, which was going really well until his elbow went boom in his ninth appearance of the year. He's on the shelf until 2012 now.

-Erik Bedard, SP, Mariners: 3-4, 3.41 ERA, 1.26 WHIP. Don't look now, but Buh-DARD looks healthy. I wonder if Seattle has thought about trading him before the other shoe drops.

-Chris Ray, RP, Mariners: 2-1, 6.60 ERA, 1.67 WHIP. As bad as the overall stats look, he hasn't given up an earned run since May 4. That includes a pair of scoreless outings against the Orioles.

I tell you what: let's see if Toronto would accept a trade of Luke Scott for Jose Bautista. Sounds like a win-win to me.
Posted by Kevin at 11:11 PM