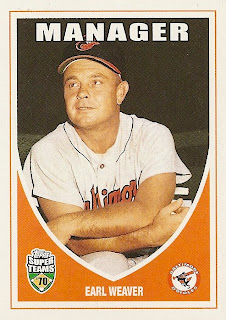 Today the Marlins announced that Jack McKeon, who previously led the Fish to their second World Series title in 2003, has been appointed as the club's interim manager for the duration of the 2011 season. This is noteworthy because McKeon is 80 years old, and first managed in the big leagues with the Royals in 1973.  He is plenty old, as countless baseball bloggers have hastened to point out today. He managed George Brett and Rickey Henderson during their rookie seasons, and gas cost 50 cents a gallon when he first took the helm of a big league team (recently having spiked from 25 cents due to shortages). The only other octogenarian skipper in MLB history was the legendary Connie Mack, who managed the Philadelphia Athletics until he was 88. But there's an asterisk there: Mack was also the owner of the A's, so he had some unprecedented job security. He also delegated most of the managerial duties to his son and to coach Al Simmons in his later years.

I'm more than willing to add my voice to the chorus: how old is Jack McKeon? He is three months and nine days younger than Earl Weaver, who retired as Orioles manager for the second and final time 25 years ago. I know that there are plenty of disenchanted O's fans who have spent much of the last quarter-century yearning to see Earl back in the Baltimore dugout, although he seems to want no part of it. If McKeon has any success down in Miami, a lot more people might start pestering the argumentative Hall of Famer.
Posted by Kevin at 8:17 PM

Earl in the O's dugout? I'm for it. But when it comes to pitching, defense and the three run homer, Earl's formula for success, the current club would come up a wee bit short, no?

I think I read that McKeon had already lost a managing job before the oldest guy on the Marlins was born. Yikes.

Bob - There are something like seven active big leaguers who were born before McKeon made his managing debut in KC.