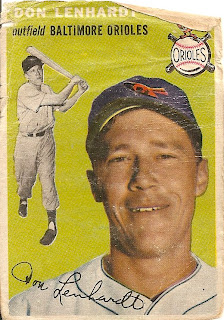 On this date in 1952, the Red Sox and Tigers got together on a nine-player trade. What does that have to do with the price of eggs? Well, incredibly, eight of those nine players ultimately passed through the Orioles organization. The Red Sox acquired:

-Johnny Lipon, a shortstop who played seven games for the Browns in September 1953 and was traded to the White Sox the following February, just after the team moved to Baltimore.

-George Kell, a future Hall of Fame third baseman. He finished his career in Charm City (1956-1957), mentoring young Brooks Robinson and representing the Orioles in the All-Star Game and posting a .297 average in his final season.

-Dizzy Trout, a righty pitcher who posted a 27-win season for the Tigers during World War II. He attempted an ill-fated comeback with the Birds as a 42-year-old in 1957, allowing four hits and three runs and retiring a single batter.

The following players headed to the Tigers in the deal:

-Don Lenhardt, an outfielder and corner infielder who peaked with a .317 average in 97 games for the 1953 Browns. He was a member of the O's first Opening Day roster in 1954, but was traded back to Boston after playing in 13 games.

-Johnny Pesky, beloved Red Sox second baseman and three-time A.L. hits leader. The Orioles signed him in December 1954, but released him the following spring. He then called it quits.

-Bill Wight, a veteran lefty who pitched for eight different teams. He was an Oriole from 1955-1957, posting a 21-26 record and a 3.46 ERA. He made his bones as a scout for 37 years, primarily with the Braves. His signings included Joe Morgan, Dusty Baker, Dale Murphy, Bob Horner, and David Justice. Incidentally, the O's got him in 1955 by sending Hoot Evers to Cleveland.

The odd man out was infielder Fred Hatfield, an infielder known for his deft fielding and an ability to draw a walk. He never passed through the Baltimore organization, but in addition to this deal, he was a part of two other trades that involved a total of four one-time Orioles (Al Smith, Jim Brideweser, Harry Byrd, and Bob Kennedy).

I'm sure this all means something, but I couldn't began to tell you what that might be.
Posted by Kevin at 11:12 PM