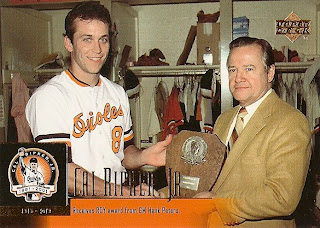 This card comes from a special eight-card set that Upper Deck and Coca-Cola put out in 2001 to celebrate Cal Ripken, Jr.'s retirement. It's a different kind of photo than those that usually appear on a baseball card, with Cal accepting his 1982 Rookie of the Year plaque from Orioles general manager Hank Peters. That's a heck of a suit Hank's wearing - it's amazing to see how people dressed when I was born. That O's locker room certainly looks different, too. It more closely resembles the dressing room in a high school theatre when you think about the cushy accommodations that players have now. The years keep rolling.
Posted by Kevin at 11:20 AM

Cal looks like a high school kid. I wonder if the Upper Deck guys stuck the logo on the wall just for the picture.

I initally thought the same thing as you. Then I realized that this picture was taken about 7 years before Upper Deck came into existence, and that logo is just the logo that is on the front of all their cards (it just looks "on the wall" because this is a scan of the card).

LOL, well I'll be. Now that you pointed that out I can see it. And the timeline makes sense. I clicked the pic and the large size version makes it a lot clearer.