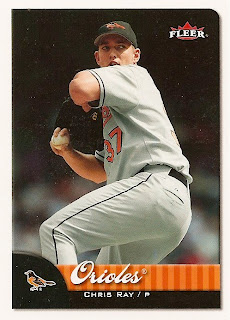 Chris Ray was an Oriole for parts of four seasons, but I didn't know much about the guy. He was born in 1982 (like me), was a product of the College of William and Mary, and used Marilyn Manson's cover of "Sweet Dreams" as his walk-in music from the bullpen...talk about creepy. But it turns out that Chris is also a beer fanatic.

Now I appreciate and enjoy a good brew while I'm at the ballpark or sitting on the couch watching the game on TV, but Chris Ray is serious about his beer. According to this blog post by Kendall Jones, the reliever is an avid home brewer, with greater aspirations for the future. He and his brother have hopes of someday opening their own brewery in Ashland, VA, where Chris lives in the offseason. With the help of his father-in-law (a farmer), he plans to grow his own hops.

The article came about because Chris and Kendall visited Seattle's Fremont Brewing Company last Monday to brew a special batch of beer. Homefront IPA will be sold at several locations in the Seattle area, including Safeco Field, with the proceeds going to Operation Homefront, a charitable organization that assists the families of military members and wounded veterans.

It's good to see Chris putting his other talents to good use, and hopefully the press that he gets helps him to connect with others who appreciate his craft:

I asked if any of his fellow Mariners like craft beer, and if he and the rest of the bullpen ever slip out for a good beer after a game. “Not really,” he said. “There are a few guys, but it’s pretty hard converting light beer drinkers. I do bring my beer into the club house, though.”

Bunch of Philistines.
Posted by Kevin at 8:14 PM

Must be the angle but it looks like he's got his arm and the ball under his glove in his delivery. Just looks strange to me.


Or maybe I had one too many whiskey sours.