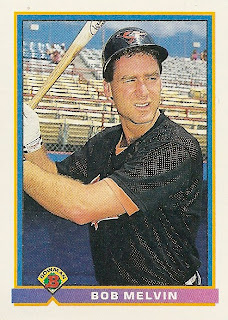 Bob Melvin got a new job today. Bully for him! The former Tigers/Giants/Orioles/Royals/Red Sox/Yankees/White Sox catcher is now the interim manager of the Oakland Athletics, after the O's beat the A's so badly that they had no choice but to fire skipper Bob Geren. Sure, the experts will blather on about four straight years without a winning record this, and alienated the players that, but you and I know the truth. Anyway, I'm glad Melvin is getting another shot. In 2007, he led the Diamondbacks to 90 wins and an NLCS appearance and won the N.L. Manager of the Year Award. Arizona finished with a record 11 games better than expected, based on the fact that they were outscored over the course of the year by 20 runs. I don't know if you can give him the credit, but let's see you win a division with Livan Hernandez, Doug Davis, and Micah Owings as your 2-3-4 starting pitchers. Anyway, they slipped to 82 wins the next year despite adding Randy Johnson and Dan Haren, and Bob got the quick axe in 2009 when the club got off to a 12-17 start. Sounds like a raw deal if you ask me. I hereby wish Bob Melvin and the Athletics the best of luck...until August 15, when the O's travel to that empty concrete pit in Oakland to settle the season series.
Posted by Kevin at 7:42 PM