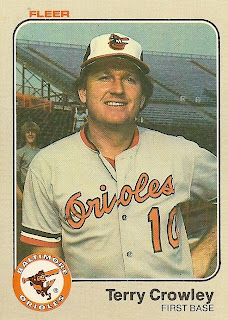 In 1966, when the Orioles won their first World Series, they drafted a 19-year-old kid out of Long Island University with their 11th-round pick. It was, of course, "the Crow".

He debuted in 1969, a September callup for the first O's team to lose in the World Series. He went 6-for-18 in 7 games at the end of that season.

A year later, he was a valuable bench bat for the 1970 World Champions, hitting .257 but endearing himself to Earl Weaver by drawing enough walks to post a .394 on-base percentage.

After a two-year exile to Cincinnati, he played seven games for the Braves in 1976 before being released. Three weeks later, he was back in Baltimore, where he stayed through the 1982 season. There was a return to the World Series in 1979, and a near-miss in 1982. At the end of that season, Weaver departed, and so did Crowley, finishing his playing career in 1983 as a Montreal Expo.

In 1985, Terry and Earl were both back in the Oriole dugout, with Crow serving as his former manager's hitting coach. Though Weaver retired for good after the 1986 season, Crowley stayed until 1988.

This time, he didn't resurface in Charm City until 1999, spending much of the interim in Minnesota as Tom Kelly's batting instructor. He reprised the role in Baltimore under Ray Miller, and kept it through the 2010 season, surviving several more managers. Even when he left the post during the past offseason, it was reported that it had been his own choice. Whether or not that was true, he remained in the fold as a minor league instructor.

This week, pitching coach Mark Connor unexpectedly resigned, with bullpen coach Rick Adair assuming his duties. That left an urgent need for an interim bullpen coach, and the Crow got the call. It's not expected to be a long-term solution, but the fact remains that Terry Crowley is spending at least part of a 29th season in an Orioles uniform, and it's his fifth separate stint. 45 years after the Birds kick-started his pro baseball career, he's still here...or here again.

To end on a complete non-sequitir, how about that goofy, gawky kid hovering over Terry's shoulder on this card?
Posted by Kevin at 9:33 PM

Kevin, quite a few of the pictures in the '83 Fleer set were taken at Arlington Stadium prior to an O's game I attended with my buddy (another O's fan) the year before. We were sure we'd show up in some cards but it didn't happen.