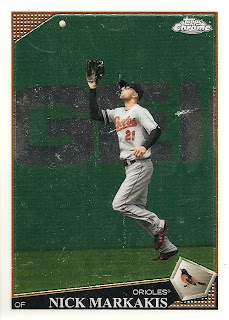 Does your mind ever get stuck on one track, causing you to completely shut out all else, to your own detriment? That happened to me last night.

I spent yesterday hanging out with my girlfriend and really dragged my feet getting home. It was a quarter after ten when I finally climbed into my car and drove home. I made excellent time, but that still meant that it was almost midnight when I got back.

A smart person would have gone straight to bed. Instead, I scanned a card and wrote something quick for this blog. I still could have called it a night and gotten five and a half hours of sleep. Nahh, gotta put a link on Twitter. While I was there, I glanced at my feed and saw that Steve of White Sox Cards had posted a link to the trivia contest on his blog with a note that no one had guessed correctly yet. I'd glanced at the question earlier that day, saw a few quick responses in the comments, and assumed that one of them would be right. There are lots of sharp cookies in the baseball card blogosphere. But I still had a chance to win, and the prize was a 2010 version of the Strat-o-Matic Baseball board game. Count me in!

The question that burned a thousand brain cells was this: "What flash in the pan Major League pitcher ended his long professional career by fielding a triple play?"

Hint: It happened in the twentieth century.

So I started furiously Googling. I found a SABR database that listed every major league triple play by fielding position. I went through the pitchers one-by-one throughout the 1900s, looking up their career stats to see if the triple play occurred in their final game. The only one was Pete Smith, who had already been guessed and shot down by Steve. I tried some text searches and just couldn't narrow things down. At 1:30 AM, I finally headed to bed, exhausted and frustrated.

I got up for work four-plus hours later feeling like I'd been hit by a truck. I pulled up Steve's blog on my iPhone and checked the comments: still no winner. All morning I chewed on the maddening problem, finally gathering from Steve's further remarks that "professional" was the key word. This triple play could have happened in a minor league game...or in Mexico, Japan, or elsewhere. That didn't make things easier, since MLB stats are those that are most readily available and painstakingly documented. This mysterious triple play could have happened any time, anywhere! I tried honing in on the "flash in the pan"qualifier, searching for baseball's all-time fluke seasons. How about the "long professional career" portion of things? I tried to uncover some ageless hurler that had slipped my mind but came up with the usual suspects like Nolan Ryan and Satchel Paige.

Finally, as my lunch break was drawing to a close, I gave it one last Hail Mary. I did a site-specific search of the Baseball-Reference.com Bullpen wiki with the terms "triple play" and "ended his career". Within the first ten results, I struck gold! My mystery man was Bruno Haas, and he was a flash in the pan in the sense that his major league career consisted of nine games for the 1915 Athletics. A desperate Connie Mack had signed the 24-year-old Haas right out of prep school, where the young man had befriended Connie's son Roy. In his major league debut, Bruno set a dubious major league record by walking 16 batters. He had an 11.93 ERA in six games on the mound. He also spent three games in the outfield, and went 1-for-18 at the plate. Afterward, Bruno went on to play in the minors for 21 years without ever making it back to the bigs. He became a star outfielder for the St. Paul Saints and moonlighted as an NFL halfback.

Remarkably, Haas' story doesn't end there. He founded the Northern League, which lasted almost 40 years despite having its origins in the Great Depression, and continued his baseball career as a minor league manager, playing in games sporadically. The last such appearance came in an All-Star Game in 1946, when the 55-year-old inserted himself as the pitcher in the ninth inning. He allowed two singles and a walk to load the bases, then made a diving stop of a ground ball and threw home to force the runner. The catcher fired the ball to first base for the second out, and the first baseman made a heads-up play to cut down the runner from second base trying to score. Bruno knew how to quit while he was ahead!

So I can finally rest easy as I wait for my new copy of Strat-o-Matic. When it arrives, I'll do my best to turn the 2009 Orioles into a winner. I've heard that Nick Markakis has a defensive rating of 1, which is the best possible designation. That's a start, right?
Posted by Kevin at 10:50 PM

For all the hard work you put into arriving at the correct answer, you definitely deserve the spoils of victory! Congrats again!

Your board game was mailed out on Friday. Hopefully by this time next week, you will be running your Strat-O-Matic team to glory.