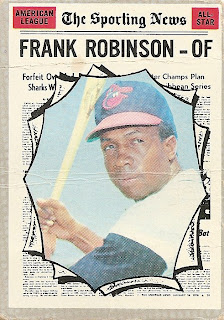 As an update to yesterday's post, Frank Robinson was released from the hospital yesterday and returned to the meetings he had been attending with MLB owners and general managers. Even though the Paradise Valley, AZ doctors gave him the all-clear and said that he was "not dehydrated, but a little dry", he wisely said that he would follow up with his doctors at home in Los Angeles. He suggested that heart health wasn't something to take lightly, but also seemed to be attempting to head off any potential nagging: "I know my doctor will be calling me tonight telling me to get in there tomorrow. And I know my family will be after me to go.”

It just bears repeating: Frank Robinson is the baddest badass that ever badassed. Eddie Murray would agree.
Posted by Kevin at 8:21 PM

Once upon a time I read a great book about the 66 O's in which the author referred to Frank Robinson as possessing "universal competitive zeal." In mid-60s, middle of the road, hometown journalist speak, I think he was making the same point as you.

Haha, that's an even more artful way to put it.