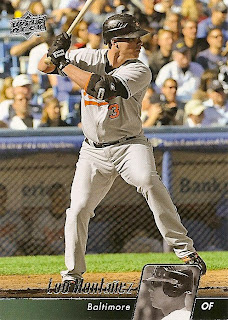 I'll take a break from posting autographs to show you my impulse buy from FanFest. While strolling the third floor of the convention center, I spotted a sign outside of a conference room: "Silent auction and game-used items". I stopped dead in my tracks and inhaled sharply. I've toyed with the notion of ponying up for a game-used jersey ever since I spotted a rack full of them at the National in August. There was something intoxicating about those polyester uniform tops, brightly colored with 1980s-2000s logos and wordmarks, bearing names and numbers of thoroughly uninspiring ex-players. Anyone can own a Cal Ripken, Jr. or Roy Halladay jersey. But a Kirk Saarloos Athletics jersey or a Peter Bergeron Expos road jersey...these things appeal to my twisted sense of humor and aesthetics. 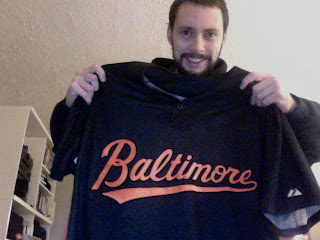 I entered the room and gravitated toward a table piled high with orange and black batting practice jerseys. They were all available for $50 each, and the names and numbers were a wonderful cross-section of forgotten or soon-to-be-forgotten coaches, instructors, minor leaguers, and fringe major leaguers. I glossed over the instructors and minor league coaches. Even I didn't want something as esoteric as a Richie Hebner #99. Same thing goes for the spring training invitees who didn't sniff the majors; tough luck for you, Chorye Spoone and Blake Davis. I spent several minutes clutching a Jake Fox #47 black road jersey. There's something about that big, hard-swinging lummox that just reaches me. But then I realized that it was enormous, a size 52 that hung to my knees. I briefly considered an Oscar Salazar #16 and an Adam Eaton #56, but ultimately settled on a Lou Montanez #16 (size 48). I like the look of the black road jersey over the orange home jersey due to the "Baltimore" wordmark. Besides, the shade of orange on the other jersey looks washed-out. 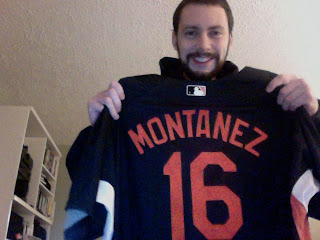 Lou also seemed like a good choice because he came across as an articulate and decent guy during his time in Baltimore (and Bowie and Norfolk). He also had some rabid supporters among O's fans, including one Camden Chat member who declared, "LOU CAN HIT. DEAL WITH IT." That phrase became a running joke on the blog. Montanez just signed as a free agent with the Cubs, the organization with which he spent the first seven years of his professional career. I guess that ensures that I will be the only person in Charm City wearing a Lou Montanez jersey. As tongue-in-cheek keepsakes go, it's a good one.
Posted by Kevin at 10:01 PM

Cool jersey, Kevin. Of the ones they are wearing I like the black one the best. At least in the O's case black is an official color and has been since '54. (Unlike the Mets and A's and teams like that.)
I've got two player shirts, an '82 Orioles road Stoddard and a Ruppert Mundays' H. Ptah (you'll have to google that one!

Bob - It seems like all the photos of Justin Duchscherer (newest Orioles pitcher) that are online show him wearing that stupid black A's cap and jersey. Those really do stick out like a sore thumb.