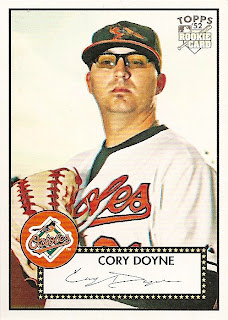 When regular reader Bob pointed out that I had featured two bespectacled (or in the case of Chris Sabo, begoggled) players in a three-day span, I decided to spin it off into a theme week. We're still a month away from spring training, so I'm all about generating easy content. There's no better way to continue Four-Eyes Week than with this stupendously goofy card. This would be Cory Doyne's only major-brand baseball card, if not for a 2003 Bowman pre-rookie issue. What a shame.

So much to absorb from one 2 and 1/2" x 3 and 1/2" piece of cardboard. The oddly colored glove, almost assuredly meant to mimic the red stitches on a white baseball. The half-unbuttoned shirt, as though Cory knows his chances of making the team (and by extension, getting his own card) are slim and none, so why should he bother looking spiffy? The terrible and baseball-player-ubiquitous soul patch, which for some reason seems to be exempt from the Orioles' stuffy no-beard policy. And of course, the state-of-the-art prescription eyewear made famous by pitchers such as Brendan Donnelly, Eric Gagne, and new Orioles reliever Kevin Gregg.

I remember Cory Doyne's brief and ignominious major league career. He was nearly 26 and a veteran of eight professional seasons when the O's promoted him to the bigs on June 16. He mopped up in a loss against the Diamondbacks, walking Conor Jackson before retiring Orlando Hudson on a grounder to second. He'd been a placeholder, and was sent back to Norfolk immediately. But the former eighth-round draft pick of the Astros was gaining momentum as a lights-out closer for the Tides: he would finish the season with a 2.23 ERA, nearly 10 strikeouts per nine innings pitched, and a franchise-record 29 saves. So when the Birds learned in late July that Chris Ray would need elbow surgery, they brought back Cory for a longer look. But after a scoreless eighth inning against the Rays in his first game back, the wheels came off.

The O's put Doyne in on July 26 for a second straight game. It was the ninth inning, they were up 10-5, it was a textbook low-leverage situation for an inexperienced pitcher. But he was shaky, allowing a couple of runs on two singles and a walk to make manager Dave Trembley squirm a little. Still he got through it, collecting the necessary three outs for a 10-7 Orioles win. Two nights later, he was called upon in practically the same situation, with much worse results. Thanks to an uncharacteristically well-pitched game by Brian Burres and some rare success against Roger Clemens, the O's had cruised to a 7-1 ninth-inning lead over the hated Yankees. It was Cory time, in a manner of speaking. Hideki Matsui greeted him with a single, and Jorge Posada followed with a two-run homer to tighten the margin. It took Robinson Cano just two pitches two rip a double, and Bronx legend Andy Phillips singled on the first pitch he saw. Still looking for the first out of the inning, Doyne instead surrendered an RBI single to Melky Cabrera. Trembley had finally seen enough and put the rookie out of his misery. He sent in Jamie Walker to blunt the New York rally with the tying run suddenly standing at home plate.

Walker (back before he fell apart) coaxed a double play out of Johnny Damon, but Derek Jeter closed the book on poor Cory with a weak grounder that he Derek Jetered through the hole to score Phillips. The final line for the first-year reliever: five batters faced, five hits, four earned runs, 16 painful pitches. I was screaming at my television like a lunatic, swearing oaths upon the name of Cory Doyne as my Yankee fan roommate wisely bit his tongue. Walker ended the anguish and earned a save by striking out Bobby Abreu to lock in the final score at 7-5.

Cory appeared once more in an Orioles uniform, battling through a scoreless 1.1 innings in a loss to the Red Sox, but the writing was on the wall. On August 3, he was returned to Norfolk, his place taken by Kurt Birkins. The vision-impaired righty endured an injury-abbreviated 2008 season in the O's farm system before signing with the Nationals in 2009. Washington released him that July, and he briefly pitched for the unaffiliated Long Island Ducks. Doyne did not play professionally last year, and his career may be over. If so, his final major league stats are as follows: 3.2 IP in 5 games, 6 earned runs allowed on seven hits, three walks, and a hit batter. His WHIP was 2.73, and his ERA 14.73. Yikes.

But in this odd-looking card, Cory Doyne has left an enduring legacy.
Posted by Kevin at 8:53 PM

I LOL'd when I saw this. Didn't know you'd take me up on the "suggestion".

Best card of a guy I've never heard of EVER! Looking forward to tomorrow.

That is one ugly card. Have you already posted an Eddie Murray in glasses card, 'cause your theme's just begging for that one to wrap up the week.