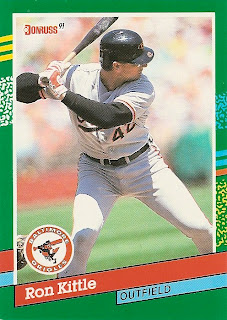 You might not remember Ron Kittle's time in an Orioles uniform. I'm sure he would like to forget it. In mid-1990, the White Sox traded the 32-year-old slugger to the O's for Phil Bradley. He played in only 22 games with Baltimore, batting just .164 (10-for-61) with a couple home runs and three RBI. He returned to Chicago in 1991 but retired after being released in August.

Though his career ran out of steam quickly, the former Rookie of the Year made the most out of the time he had in the majors. Ron hit 176 home runs in just 843 games, and averaged one homer for every 15.4 times at bat, the 22nd-best ratio of all time. He also averaged one home run per 17.1 plate appearances. There are currently 27 players (including five currently active) who hit between 176 and 186 career home runs. Of all of these men, "Kitty" had the best PA/HR ratio. Interestingly enough, he also had the lowest number of RBI at 460. This was probably attributable to his boom-or-bust offensive approach: his career batting average is a scant .239, and he struck out 744 times total. He also wore the hell out of a pair of glasses.
Posted by Kevin at 7:54 PM

Sabo and Kittle in the last three days! It's Opticians Week on OCOtD! Who's next? Joe Nolan? Lenn Sakata? Ryne Duren? Brother Lo?

I prefer to recall Kittle in his more heroic younger days, when the O's were beating he and the winning ugly Chisox crew on the way to their last world championship. I suspect I'm not alone in this preference, at least not among Orioles fans.