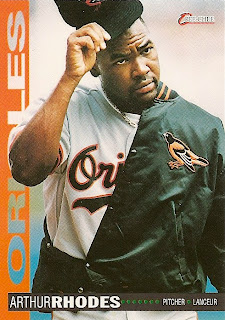 Ladies and germs, it's time once again for your annual "Arthur Rhodes is the Highlander" update. On January 3, the 41-year-old lefty signed with the Rangers for $3.9 million for one year, with a vesting option for a second year at $4 million. If he pitches in 62 games in 2011 and does not finish the season on the disabled list, the option will be guaranteed. Incidentally, his games totals for 2008-2010 have been 61, 66, and 69. Such is the life of the LOOGY (Lefthanded One Out GuY). Barring disaster, Rhodes will begin his 20th major league season in April, with a fair chance of ensuring himself a 21st. Let the good times roll.
Posted by Kevin at 1:19 PM