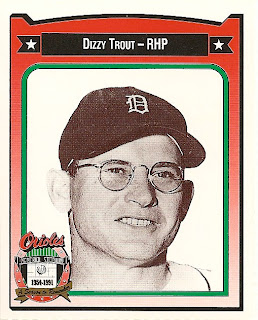 The Orioles seem to be desperately scouring the free agent and trade markets for a veteran starter, convinced that they need to create more competition for the young arms vying for the rotation. Hopefully they don't get desperate enough to coax someone out of retirement, as they once did with a World War II-era All-Star.

Paul Howard "Dizzy" Trout was fortunate enough to enter his prime as a pitcher during the war, when the major league talent pool was greatly diluted by the departure of able-bodied players for military service. He led the league in shutouts (5) and wins (20) in 1943 and had a 2.48 ERA that placed him in the top ten for the first of six times in his career. The following year his record was an astounding 27-14, and his ERA a league-best 2.12 in an astronomical 352.1 innings - not only did he complete 33 of his 40 starts, he relieved in 9 other games! What's more, Dizzy batted .271 with 5 home runs and 24 RBI and produced an OPS+ of 107. In other words, he was a better hitter than Cesar Izturis. He was a contributor to the team's World Series win in 1945 as well, winning 18 games in the regular season and allowing a single earned run in 13.2 innings in the Fall Classic. Although he never hit those lofty heights again, Trout remained a dependable pitcher for the Tigers for more than a decade. He was 161-153 in parts of 14 seasons in Detroit, with a 3.20 ERA. He finished his productive career at age 37 as a member of the 1952 Red Sox, leaving on a good note with a 9-8 mark and a respectable 3.64 ERA...or so it would seem.

Five years later, the then-42-year-old Trout got the itch to come back. He had rejoined the Tigers as a broadcaster from 1953-1955, and in 1956 made an unsuccessful bid to be sheriff of Wayne County, MI. He joined a "good" semipro team in Detroit, and supposedly got the attention of the Orioles after an old-timer's game. With the club hovering around .500 for the first time in their four years in Baltimore, manager Paul Richards was willing to take a flyer. He had the veteran throw batting practice, liked what he saw, and assigned him to a short stint with the Vancouver Mounties in late August. The manager seemed realistic, offering this lukewarm quote: "We need a right-hander who can pitch a couple of innings at a stretch the rest of the season and he just might be able to do it." For his part, Dizzy was a bit more bullish: "For a couple of innings, I didn't think there are more than five or six guys in this league who can throw harder than I can."

Truth be told, Trout's three-game run at Vancouver was pretty underwhelming. He allowed only one earned run in 10.2 innings...but four unearned runs as well, to say nothing of ten hits and five walks. But Richards sent for him anyway, and in early September the 42-year-old joined a pitching staff with a handful of guys young enough to be his sons. Rookie Jerry Walker had been born two months before Diz made his major league debut in 1939!

Manager Richards eased the sage veteran back into major league competition, having him face Boston's Pete Daley with the bases empty and two out in the eighth inning on September 7. Daley hit a shallow fly ball that was gloved by second baseman Billy Gardner, and the O's still trailed 4-2. After a ninth-inning rally fell short, there was no need for the host Red Sox to bat in the ninth. One game in the rear view for Trout. Maybe he let his guard down. On September 11, the Birds hosted Kansas City for a doubleheader. In the first game, Oriole starter Ray Moore coughed up four early runs. Dizzy was called upon to start the fourth inning, hopefully to get the game under control. He lasted for four batters: double, single, triple, single. When opposing pitcher Ralph Terry singled home the third run of the inning - and seventh of the game - for the A's, Trout was yanked. He walked off of the mound for the last time that day with an 81.00 ERA for his abbreviated comeback.

The righty did land on his feet, joining the White Sox in 1959 as a pitching instructor. He also worked with the team in public relations up until his untimely death from cancer at age 56 in 1972. His son Steve pitched for the White Sox, Cubs, Yankees, and Mariners from 1978-1989. Strange but true: Steve attempted a comeback of his own with the Pirates in 1997 at age 39. He retired the side on five pitches in his first inning in the Grapefruit League, but allowed a home run to the leadoff batter in the second and apparently went downhill from there, as I can't find any other record of his performance that spring.
Posted by Kevin at 8:30 PM

Bob - And knowing is half the battle.