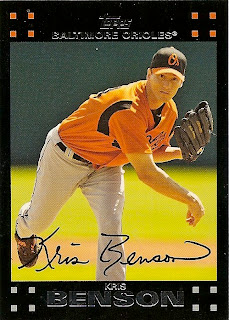 Yesterday Kris Benson announced his retirement, which I'm sure is a great shock to those of you who assumed that he retired four years ago. Since his contract with the Orioles expired after he missed the 2007 season with shoulder surgery, Kris has pitched for the Clearwater Threshers, the Lehigh Valley IronPigs, the Frisco RoughRiders, the Oklahoma City RedHawks, the Reno Aces, the Texas Rangers, and the Arizona Diamondbacks. In that time, he appeared in only 11 big league games, going 2-2 with a 7.18 ERA for Texas and Arizona. Benson said he was tired of putting in so much effort to try to stay healthy, signing minor league contracts, and stressing out about making teams. He'll just have to go home to his buxom, opinionated wife and his presumably lovely children and his millions of dollars.

Kris did have a few highlights in his one season as an Oriole. There was his five-hit win over the Nationals, not to mention the home run that he hit off of Pedro Martinez in a 4-2 win against the Mets. The latter feat represented the O's first homer by a pitcher in interleague play. In fact, he was the first Birds pitcher to touch 'em all since Roric Harrison went deep on the final day of the 1972 season, the last game of the pre-designated hitter era. So Kris Benson still holds a place in the trivia books, at least.
Posted by Kevin at 8:49 PM