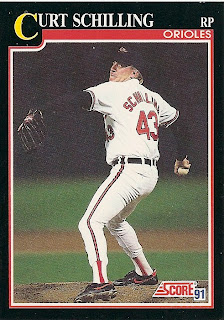 Welp, this is it. The 20th anniversary of the Orioles' own Black Thursday, January 10, 1991. If you want to see how blase the rest of the world is about that dark and dreary day, just look at the ho-hum treatment it gets from Baseball Reference. To quote from Curt Schilling's player page:

"January 10, 1991: Traded by the Baltimore Orioles with Steve Finley and Pete Harnisch to the Houston Astros for Glenn Davis."

Yep, that's it. 126.8 total WAR (wins above replacement) out, 0.1 total WAR in. But on the bright side, the Orioles weren't the only team to trade away Curt Schilling in a lousy deal. Check this out:

April 2, 1992: Traded by the Houston Astros to the Philadelphia Phillies for Jason Grimsley.


July 26, 2000: Traded by the Philadelphia Phillies to the Arizona Diamondbacks for Omar Daal, Nelson Figueroa, Travis Lee and Vicente Padilla.


That's four trades where the team moving Schilling didn't get much of anything in return. Still, none of the others hold a candle to the Orioles' stink bomb. People don't forget.
Posted by Kevin at 8:26 PM

Well, Schilling did pretty much force the trade from Philly to Arizona. And I was going to say that the Phillies did less badly than some of the others to trade CS--they got back 7.2 total WAR from 10.5 player seasons but doing the math that averages less than 1 WAR a season. wes

Wes - As an Orioles fan, the name Omar Daal was a red flag for me in that Philly-Arizona trade.