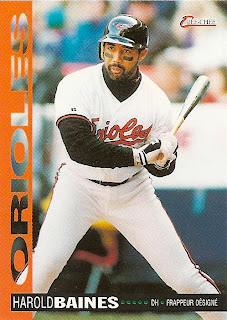 As promised, today I'll look at the collection of former Orioles on the 2011 Hall of Fame ballot who did not reach the 75% threshhold (436 of 581 ballots) needed to gain membership. Some will live to fight again in 2012, and others will never see the ballot again. In decreasing order of votes:

Tim Raines (218 votes, 37.5%): Tim Senior got a fair bump from 2010's 30.4%, but it's disheartening that so few voters recognize his greatness. He was one of the dominant players of the 1980s, remained productive until age 41, maintained a career on-base percentage of .385 (62 points higher than Hall of Fame teammate Andre Dawson!), and stole 808 bases (more than all but four players in history) at an 85% success rate. Maybe a lack of big-name first-balloters in the next year or two will boost his prospects.

Rafael Palmeiro (64 votes, 11.%): Oof. And so the highfalutin' moral majority of the BBWAA has their say. Raffy himself was pretty realistic in his expectations for his first year on the ballot, figuring that he might poll 25%. Even that was a bit too hopeful, it seems. I'd point to the madness of such a meager showing for a player with the formerly-automatic counting stats of 3,000 career hits and 569 home runs, but this electoral statement has nothing on the injustice being done to Jeff Bagwell, who never tested positive, isn't somebody frequently cited as a steroid suspect, and yet received 41.7% of the vote with superlatives that include an MVP award, 488 doubles, 449 home runs, 202 steals, a slash line of .297/.408/.540, and an OPS+ of 149. I have a feeling that the next few years of Hall of Fame developments are going to be immensely frustrating.

And now, the four ex-O's who failed to receive 5% of the vote (30 total votes) and will not be eligible for the Hall in the future.

Harold Baines (28 votes, 4.8%): So close, and yet so far. Harold didn't go without a fight, as he scraped by for the previous four years with between 5.2% and 6.1% of the vote. Ultimately, he was the kind of player who has trouble making it to Cooperstown: quiet, unassuming demeanor; long and consistently good yet never spectacular career; lack of big round numbers (384 HR, 2,866 hits); and of course, the unfair stigma of having spent most of his career as a designated hitter after knee injuries robbed him of his mobility. So long, Harold. Thanks for getting it done for so long and so well.

B. J. Surhoff (2 votes, 0.3%): Well, someone was thinking of him anyway. One of the two votes that B. J. received was from ESPN's Barry Stanton, and it's generally kind of a neat story. At the beginning of Stanton's career, he covered and was impressed by a teenage Surhoff in amateur competition. He told the young player that he would be voting for him for the Hall of Fame someday, and he figured that he might as well take advantage of the opportunity. If he had thought that his vote for Surhoff would take away from a more deserving candidate, he maintains that he would not have done it. Indeed, if there's any issue with Stanton's ballot, it's his general decision-making: his votes went to Jack Morris, Edgar Martinez, Tino Martinez, Don Mattingly, and Surhoff. No Alomar, Blyleven, Raines, Larkin, Trammell, McGwire, Palmeiro...it's like he chose the other names at random. The lack of intellectual curiosity by some of these writers is baffling.

Charles Johnson: (0 votes, 0.0%): There were no Barry Stantons to shield CJ from the indignity of the goose egg. University of Miami product Johnson started off as a defensively gifted hometown hero with the Marlins, winning the National League Gold Glove in each of his first four seasons. He usually threw out at least 40% of base stealers and had some pop, reaching double-digits in home runs in 9 out of 10 seasons. 2000 seemed like a breakout year, as he batted .304 with 31 home runs and 91 RBI for the Orioles and White Sox. But he fell off a cliff at age 30, hitting .227 from 2002-2005 and bottoming out with a release from the lowly Devil Rays in June '05. What have you done for me lately?

So that's all I intend to say about the Hall of Fame until the ballot rolls out again late this year. One more time through the wringer for the first three guys on this list, and the first and probably last go-round for Javy Lopez and Scott Erickson.
Posted by Kevin at 8:34 PM

Tim Raines is a Hall of Famer. Why he gets overlooked baffles me.

I always liked Surhoff as a ballplayer but he was never HOF material. ESPN has become more of a Sports Tabloid (LeBron Special, Reality shows, Stupid format for SportsCenter) than a Sports Channel (actual sporting events). I haven't watched ESPN for more than 5 minutes in the last 5 or 6 years.

Bob - It seems like he's being punished for not being Rickey Henderson. I'm sure there are also dopes who are making a statement about his early-career cocaine habit - never mind that Molitor was an ex-addict and waltzed into the Hall.

Ryan - You're probably the better for it. In general, I watch PTI and live sporting events and avoid any other "original programming" like the plague.