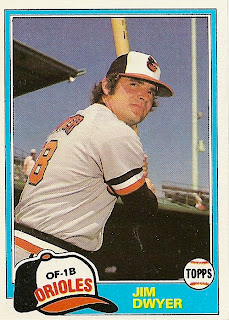 A few minutes ago, I checked my email and found a trade proposal. One of my readers saw that I needed Ron Perranoski's card for my 1965 Topps set, and I had replied to him over the weekend to find out what he'd be looking for in return. Interestingly enough, his favorite player is/was Jim Dwyer, and it looks like I'll be able to fill a need in his player collection. Next I checked the Baseball Reference Bullpen's daily almanac to see if there were any Oriole-centric tidbits for January 3. As serendipitous coincidence would have it, today is "Pigpen" Dwyer's 61st birthday! It's also Monkton resident A.J. Burnett's birthday, but he's both a Yankee and a multimillionaire, so he gets nothing and likes it.

One more Jim Dwyer fun fact: the 2011 Hall of Fame class is being unveiled this Wednesday, and Bert Blyleven and Jack Morris are candidates who each have very ardent supporters. Dwyer was a contemporary of both players, and faced them many times. He batted 50 times against Morris, drawing 9 walks and hitting safely 12 times for a .300 average and .420 on-base percentage. In 28 trips to the plate against Blyleven, he managed only two walks and four hits (.154 AVG, .214 OBP). Make of that what you will.
Posted by Kevin at 9:59 PM

My first thought upon seeing this Jim Dwyer card was a vague memory of Reggie Jackson's last game at Memorial Stadium in 1987. As I remember, I went to the game with my friend Adam, a couple of other middle school chums, and somebody's father to celebrate a birthday. It was a Sunday afternoon game early in September. My friend's Dad wanted to leave late in the game, with the O's trailing and Reggie having yet to step on the field. We actually made it out of the stadium and into the parking lot before we persuaded whomever's Dad it was to take us back in to watch the rest of the game. Reggie didn't play. But Jim Dwyer hit a game-winning homer off Dennis Eckersley in the bottom of the 9th inning to give the O's a sweet come-from-behind victory. After a little poking around on the internet, I'm happy to report that my memory of this game is right on. Reggie didn't play. And Dwyer followed a 9th inning Cal Ripken homer with one of his own to send the crowd home happy!

Drew - Nice memory! I saw Mike Mussina's last start at Camden Yards...though he was a Yankee then.

How about the dinger Jim Dwyer poked in the 83 World Series. Another fine pick up by then the wise Orioles