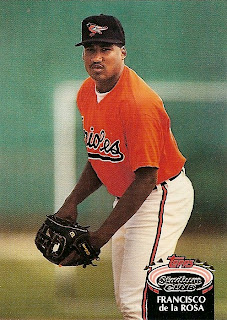 Reader Bo tipped me off a few days ago to some unfortunate news. On January 6, former O's pitcher Francisco de la Rosa passed away in Baltimore. The native of the Dominican Republic was originally signed by the Blue Jays in 1985, but spent four years in the Oriole farm system (1988-1991). He went 9-5 with a 2.05 ERA for the Hagerstown Suns and Rochester Red Wings in 1990, and followed up with a 2.67 ERA in 38 games the following year at Rochester. He received a September callup from the Birds in 1991, allowing two earned runs in four innings of relief. The club traded him to the Yankees in the offseason for Alan Mills, and de la Rosa never made it back to the major leagues. After his career ended, he lived in New York and Philadelphia before moving back to Baltimore to live with his brother Gustavo. I couldn't find a cause of death listed anywhere, but Francisco was only 44 years old. Hopefully he's at peace now.
Posted by Kevin at 9:31 PM