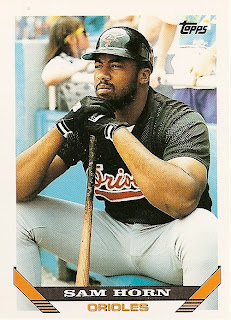 Today I want to wish a happy birthday to Ryan, a diehard Orioles and Phillies fan who I befriended through the technological wonders of Twitter. We had the opportunity to meet in the meatworld last August at the National Sports Collectors Convention here in Baltimore, and I look forward to catching a game with him some time this season if the timing is right.

The list of January 25th baseball birthdays is pretty weak; former Oriole phenom Wally Bunker might be the best of the lot and he has very few non-vintage cards. The only other ex-O's are reliever Richie Lewis (four games, 12.71 ERA) and first baseman Francisco Melendez (nine games, .273 AVG). So instead I went with a card from 1993 Topps, one of Ryan's favorite sets of all time. The design might not be so hot, but I've got the kind of affection for it that can only be achieved by building your first set at age 11, and doing it the hard way: pack-by-pack, from now-obsolete places like Revco and McCrory's. (I suddenly sound incredibly old for someone under age 30.) The photography is also better than you'd expect at a glance. This is one of my favorite Orioles cards in the set, with the hulking Sam Horn sitting in pregame repose with his hands and chin resting on the knob of a heavily pine-tarred bat. Meanwhile, a female fan leans against the rail behind him, wearing some spiffy neon sunglasses and clutching a baseball in her hand. It's time to play ball.
Posted by Kevin at 9:35 PM

In my only trip to old Memorial Stadium (1991 if I'm not mistaken) Sam Horn kept walking by a bunch of us kids who were trying to get his autograph. He ignored us - hard. But all of a sudden a couple of young coeds showed up on the rail, and he magically had time to come over and sign their stuff. But not us kids.

Oh Sam Horn, in my mind it's always opening day in Kansas City in 1990 ... and to think all these years and I had no idea that we shared a birthday. I guess I didn't read the back of your cards too closely ... perhaps because I didn't want to be reminded of the strikeout totals.

Rob - The man had his priorities, you could say.

Drew - The guy did one or two things well, but he did them very well.