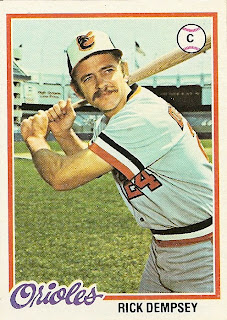 Let's do a little This Date In Orioles History, mmmhmmm. On September 9, 1979, the O's continued plowing through the American League en route to their first World Series since 1971. Rick Dempsey had only one hit in five trips to the plate, but he made it count. The Dipper's grand slam capped a 6-run sixth inning, helping fuel a 16-4 rout of the third-place Red Sox at Fenway Park. Through the fourth inning, it was actually a tightly-contested game. Baltimore's Steve Stone and Boston's Mike Torrez had each allowed a home run, with Gary Roenicke's two-run shot giving the Birds a one-run advantage. Jim Rice went deep for the Sox with the bases empty.

But in the fifth inning, the first four Orioles hit safely to chase Torrez, with Rich Dauer singling in a pair of runs. Allen Ripley offered little relief for the home team, allowing three more runners to score before buckling down and retiring the side. Terry Crowley's two-run double put the O's up 7-1, but they were just getting started. Al Bumbry led off the sixth with a home run, and a Dauer single and a two-out double by Doug DeCinces prompted Ripley's exit. Boston manager Don Zimmer ordered new pitcher Joel Finch to intentionally walk Crowley to load the bases, but the move backfired as Roenicke followed with an unintentional free pass to push across the ninth Baltimore run. That brought Dempsey to the plate, he of the low-.240s batting average and 5 home runs. When Rick reached the seats, it was the first grand slam of his career; he would hit only one more, and that would have to wait until 1986. 13-1, Orioles.

The BoSox tried to make it respectable in the bottom of the seventh, loading the bases to bring about Stone's exit. Big Tim Stoddard did some damage to the starter's ERA, allowing all three inherited runners to score on a Rick Burleson walk and a two-run single by Fred Lynn. But Rice followed with a double-play grounder, and Boston did not threaten again. The Birds, however, tacked on a run in the eighth on a Roenicke single (giving him four RBI on the day) and a pair on run-scoring hits by Ken Singleton and Eddie Murray in the ninth. Stoddard finished out the game, sealing the 94th win against just 46 losses for the O's. Stone earned his tenth win and would finish 11-7. A year later, he figured a few things out and boosted his record to 25-7. The blowout win was the seventh in a row for the Birds, and put them a season-best 12.5 games ahead of second-place Milwaukee. They finished 102-57 and disposed of the Angels in the ALCS, but ran into some sort of black and gold nightmare in the World Series. Yuck.
Posted by Kevin at 7:26 PM