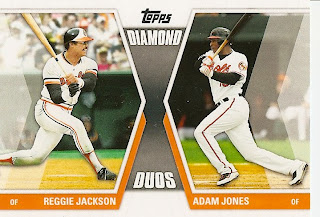 I was going to talk about the exhilarating joy and schadenfreude that I felt in watching last night's near-simultaneous walkoff wins by the Orioles and Rays, but I need to let my thoughts marinate for a bit longer. Besides, I just have to show off this great card that I picked up at the card show last Saturday. Topps finally got the hint: people want to see Reggie in orange and black. The contrast between Jackson's loping power swing and Adam Jones' more streamlined, vertical swing is interesting to see. It might seem like any parallels drawn between these two would be a little lopsided in favor of the larger-than-life Hall of Famer with 563 career home runs, but Jonesy has a few feathers in his cap that Reggie can't match. "The Straw That Stirs the Drink" never won a Gold Glove, as Adam did in 2009. Jackson also didn't earn Most Valuable Oriole honors in his lone season in Baltimore, whereas Jones was just voted as the 2011 MVO by the local media. It was a very close race, with J. J. Hardy finishing second by a single vote. Matt Wieters (who would have been my choice) was the third-place vote-getter. Adam earned his kudos by setting career highs of 26 doubles, 25 home runs, 83 RBI, 12 stolen bases, a .466 slugging percentage, a 114 OPS+, and 16 outfield assists. Next year, maybe he'll even get his own candy bar.
Posted by Kevin at 8:49 PM