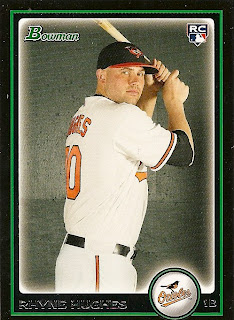 1. He is the only "Rhyne" in MLB history, except for Depression-era infielder Hal Rhyne. But I'm not counting last names. Ryne Sandberg and Ryne Duren spelled it differently, of course.

3. Hughes spent parts of the 2007-2009 seasons with Tampa Bay's AA affiliate, the Montgomery Biscuits. The Biscuits have the most fantastic logo I have ever seen.

4. When the O's promoted Rhyne to the majors for the first time last April, he broke the news himself via Facebook.