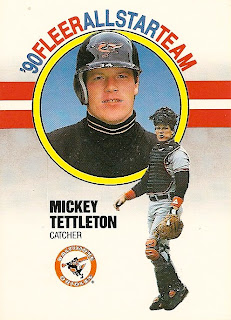 Just because the Orioles are one loss away from clinching their fourteenth straight losing season, that doesn't mean that they're not breaking records. Just yesterday, Mark Reynolds struck out for the 161st time, topping Mickey Tettleton's 1990 total for the whiffingest effort in club history. That might not be the kind of record a player wants to own, but Reynolds has also clubbed 31 home runs. Another 4 and he'll have the best home run output by an Oriole since Albert Belle went deep 37 times in 1999. Mark can also take pride in the fact that he's likely to post his lowest strikeout total for a full big league season, even after fanning 13 times in the past 5 games. Two years ago, he set the MLB record with 223 strikeouts. So 161 - make that 164 after today's game - is child's play.

Of course, it's entirely possible that Reynolds has created the breeze that's kept temperatures milder than usual in Baltimore over the past few weeks. I'm not about to complain about that, either.
Posted by Kevin at 11:16 PM

Max - The question is, if Froot Loops gave Mickey his power, what did Milton Bradley eat? Cocoa Puffs?