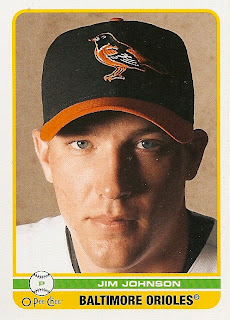 At long last, in the final month of the 2011 season, Buck Showalter has tired of watching that junk-tossing galoot Kevin Gregg blowing saves. For the past few weeks, he's instead trusted the Orioles' ninth-inning leads to Jim Johnson, who is *gasp* the best reliever in the bullpen. And guess what? The sinkerballer has gotten the job done with efficiency and a decided lack of drama. Since September 7, when he pitched around a walk and a single to preserve a 5-4 11-inning win over the Yankees, Johnson is 6-for-6 in save situations. He has allowed no runs, one hit, and three walks, though oddly he hasn't recorded a strikeout. (Full disclosure: he surrendered a run in his only non-save appearance, finishing out a 6-2 win over the Angels. In that outing, he struck out a pair. Go figure.)

It's nice to not have to sweat out those last three outs of the game. I've had my fill of Doug Jones and Jorge Julio meltdowns, of George Sherrill and Kevin Gregg tightrope acts. It's heaven on earth to see the rarest of sights for an O's fan, a quick and easy ninth inning in a close game. For a reliever - any reliever - to have a series like Johnson just did in Boston is a rare and beautiful thing. In helping the Birds secure their first series win at Fenway since 2003, J.J. saved all three Oriole wins. He eight of the nine batters he faced; Jacoby Ellsbury reached on catcher's interference on an 0-2 pitch on Tuesday night and was immediately wiped out by a Dustin Pedroia double play grounder. In fact, all nine outs recorded by Johnson came on grounders, which tells you just how well his stuff is working right now. He disposed of the Red Sox on 27 pitches total over those three games, allowing him to work without a night off in between.

There's been a lot of talk about moving Jim Johnson to the starting rotation in 2012, and considering the strides he's made as a pitcher in the past few years, the Orioles would be foolish not to try it. After all, a pitcher with Johnson's talents can provide more value in 160 innings than he can in 70 or 90. Besides, we all know that the O's never seem to be able to find enough starters. But I can think of worse things than giving him the ball for those late, high-leverage innings.

*Of course it would figure that by the time I posted this, Kevin Gregg was called upon in the ninth inning of tonight's 6-5 win over the Tigers, and got the save with a 1-2-3 inning. I remain confident that Jim Johnson would have been in there if he hadn't worked three straight days in Boston.
Posted by Kevin at 9:45 PM