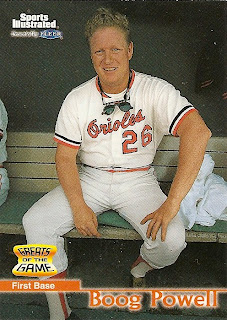 If you follow the Orioles closely enough, you'll learn not to doubt the memory of Jim Palmer. On tonight's MASN telecast, Mark Reynolds hit a towering home run over the Green Monster at Fenway Park, his 35th longball of the year. This prompted the O's Hall of Fame pitcher and broadcaster to recall a game in which Boog Powell hit not one, not two, but three home runs over the 37-foot left field wall. Just to satisfy my curiosity, I bopped on over to Baseball Reference. With a couple clicks of the mouse, I found the game in question: August 15, 1966, a Monday night affair between the first-place Orioles and ninth-place Red Sox.

Boog's first clout came with two outs and nobody on in the fourth inning, and it broke a scoreless tie between starters Jim Lonborg and Dave McNally. McNally continued blanking Boston until the sixth, when Tony Conigliaro's two-run homer put Boston ahead 2-1. Powell gave the Birds new life with another solo shot off Lonborg in the ninth, ultimately sending the game to extra innings. It stayed tied at two apiece until the eleventh frame. John Wyatt relieved Lonborg and walked Frank Robinson. Brooksie came up next and lined out to right, and then Boog capped his excellent night with a two-run homer, which provided the winning margin as Dick Hall wriggled out of a bases-loaded situation for the save. It was a 4-2 final, with all four Baltimore runs coming via Boog Powell homers. There's a statistic known as Win Probability Added, or WPA - it assigns values to each at-bat in a game. Boog's WPA for this game was 0.920, which essentially means that he was 92% responsible for the O's winning that game! I can certainly see why a feat like that would stick in Jim Palmer's memory.
Posted by Kevin at 9:12 PM

hey dude - i see ur an orioles fan.u might wanna check out my trading only blog. i just put up an orioles page here:
http://alltradebait.blogspot.com/2011/09/time-for-some-os-its-lotta-ripken.html

maybe you'll see something you like, and u have some dodgers to pass on.

I think that is the skinniest I have ever seen Boog.

Stealing Home - I will check it out!

Ryan - I was thinking the same thing. It's odd - based on the uniform, this would have been later in his career.

Still one of my favorite Boog moments as he homers in the 9th inning of the first AL playoff game ever to tie the contest with the Twins. Way to go, Boog.