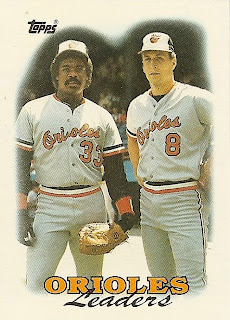 What time is it? Time to celebrate the two greatest Orioles of the past quarter-century. 16 years ago today, Cal Ripken, Jr. played in his 2,131st consecutive game, breaking Lou Gehrig's hallowed record. A year later, Eddie Murray celebrated his return to Baltimore by taking Tigers starter Felipe Lira deep for his 500th career home run. A decade earlier, the teammates posed for this card, which could double as the poster for a buddy cop film. Steady Eddie and the Iron Man are nothin' to mess with.
Posted by Kevin at 8:46 PM

I would totally go see this movie, from 1988 - Steady Eddie and Iron Man - a rip off of Midnight Run and Lethal Weapon. It would star Yaphet Kotto and Kevin Cosner and be a staple on TNT at 3am. Kenny Loggins would do the theme song and William Sadler and William Atherton would totally be the bad guys. (man, I miss the 80's sometimes...)

I love this card - one of my favorites when I was a kid.

Max - Fantastic. As someone who watched Homicide: Life on the Streets in my impressionable youth, I'm a big Yaphet Kotto fan.

Rob - Yep, it's just another reason that the 1988 Topps set has grown on me over time.