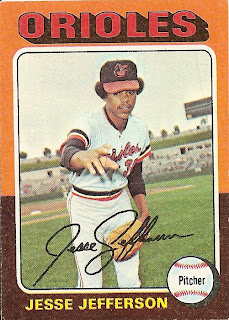 Well, this sucks. Last Thursday, former Orioles pitcher Jesse Jefferson died after a bout with prostate cancer. He was 62.

The O's drafted the right-hander out of Carver High School in Midlothian, VA in 1968. The most notable player taken by the club in that year's draft was Al Bumbry, who was selected in the 11th round. But Jefferson had some notable moments in his brief Oriole career. As I mentioned in a June 2010 blog post, he held the Red Sox to a single run in a ten-inning complete game win at Fenway Park in his big league debut in 1973. All in all, he went 6-5 with a 4.11 ERA as a rookie, notching three complete game wins. The others were a five-hit, two-run, nine-strikeout effort against Boston on August 3, and a two-run, eight-strikeout performance at Detroit on September 18. Jesse appeared in 20 games (primarily in relief) for Baltimore in 1974, compiling a 4.40 ERA while walking 38 batters and striking out just 31. The following June, he was traded to the White Sox for Tony Muser. He would go on to have a 9-year career in the majors, also spending time with the Blue Jays, Pirates, and Angels. Though his ERA was an unimpressive 4.81 overall, he can still place some of the blame for his abysmal 39-81 won-lost record on the three-plus seasons he spent for the brand-new and cellar-dwelling Toronto teams of the late 1970s. While with the Jays, he recorded his only career save, preserving the sixth of an eventual 176 career wins for longtime ace Dave Stieb on September 2, 1979.

Kevin, thank you for this nice recap of his O's career. When I read the news of Jesse's death earlier this week, this card came immediately to mind. I was hoping you would post it for Vintage Friday.