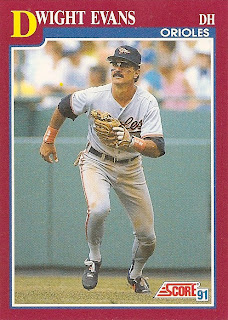 In an attempt to keep the spoileriffic good times rolling, I give you Dwight Evans, one of the greatest right fielders in Red Sox history. Yet they just cast him aside at age 39, despite the fact that he had produced a 103 OPS+ in 1990 and was one season removed from batting .285/.397/.463 (136 OPS+) with 100 RBI. So the Orioles took him in, and he rewarded them with a .393 on-base percentage in 1991, which turned out to be his farewell season. Now they seek to avenge dear Dewey, and Kevin Millar, and Fred Lynn, and all of the other Beantown castaways who found shelter in Charm City. There shall be no playoffs for you, Sawx Nation!

All kidding aside, it's been a blast watching the O's play with energy and fire and more-than-occasional competence, taking 10 out of 15 from a host of contenders down the stretch. They won three of four at Fenway Park (or as we like to call it, Camden North) last week, and their Monday night 6-3 win over that goatee-wearing fat-faced punk Josh Beckett was responsible for the Red Sox dropping into a tie for the wild card lead with the resurgent Rays. The spoilin' Birds have two more chances to bury Boston, the first coming tonight against our old chum Erik Bedard. He couldn't make it out of the third inning in his last start against Baltimore. To quote Adam Jones, LEGGO!
Posted by Kevin at 7:29 PM

If the Orioles will ever be able to beat Jon Lester, let tonight be it!

Revs Advanced to the championship game