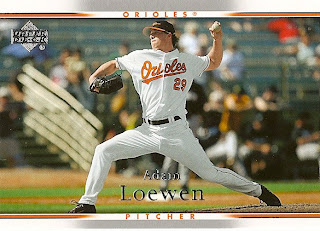 If you keep tabs on this sort of thing (which I highly doubt), you'll realize that it's been two and a half years since I last posted an Adam Loewen card. That's unsurprising, since he last played in the big leagues back in 2008. After his 52nd arm injury in about 4 years, the former #1 pick realized that he might not be built for that whole pitching thing and tried to start over as an outfielder/first baseman. The Orioles supported him, but when they dropped him from the 40-man roster to return him to the minors, the Blue Jays snatched up the native Canadian. I didn't think he'd resurface in the major leagues, particularly after he hit .246/.351/.412 as a 26-year at AA New Hampshire in 2010. But this year, Adam took advantage of the hitter-friendly ballparks of the AAA Pacific Coast League to put up a line of .306/.377/.508 with 46 doubles, 17 homers, and 85 RBI at Las Vegas. The leaguewide average in the PCL was .286/.359/.448, so it's still not likely that Loewen will stick as a hitter in MLB, but he's achieved a lot just by taking the field for Toronto. The Jays promoted him after the big league rosters expanded on September 1, and gave him a start in right field against Boston last night. In his first game since July 6, 2008, he went 1-for-3 with a hit-by-pitch and a run scored in an 11-10 Toronto victory. Even if you think it was a bum deal for the O's, it's still a pretty cool story.
Posted by Kevin at 8:26 PM

It'll be interesting to see how he does this weekend in the series with the Jays.

Ryan - He would hit his first career home run against us, wouldn't he?!