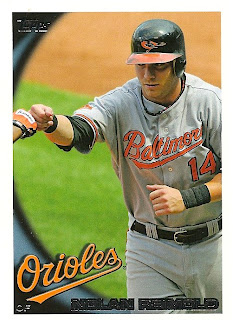 Surprisingly, the Orioles listened to my pleas and delivered a win on Friday night. It was an all-to-rare laugher, and I was glad to witness it along with my sister and a few thousand die-hards. The official paid attendance was a bit over 24,000, but I can assure you that a good number of them were dressed as empty seats. Anyway, Elizabeth and I got to our perch in the upper deck behind home plate just in time to see Capitals star Alex Ovechkin throw out the first pitch, a high, outside floater. My sis is hockey-crazed, so she even wore her red Brooks Laich jersey and carried a posterboard with a happy birthday message for Ovi.

It was a cool and still 65 degrees at first pitch, and I'll admit that I didn't harbor high hopes when I saw that Tommy Hunter vs. Dan Haren was the pitching matchup. Though Hunter, acquired from Texas in the Koji Uehara trade, kept the Angels off the board for the first three innings, the O's were blanked in their first two tries against Haren. But the O's scraped together a rally in the home half of the third. Nolan Reimold, only inserted into the lineup when Adam Jones' balky thumb kept him out, led off with a walk, stole second, and scored on a Robert Andino single. Itty-bitty leadoff hitter Matt Angle, who my sister dubbed "Beaker" for his resemblance to the narrow-headed Muppet, bunted Andino to second. After a wild pitch moved the runner to third, J. J. Hardy made it 2-0 with a run-scoring grounder.

Tiring of small ball, the Birds set off some fireworks in the fifth. Mark Reynolds led off the inning with a no-doubter home run to left field, his 33rd of the season. Andino and Angle reached base, and both scored on a double by Hardy. It was 5-0, and in spite of myself I felt like the lead was safe.

For once, the Orioles weren't content to sit on a lead. The very next inning, Chris Davis singled and Reynolds doubled to chase Haren from the game. Rookie Tyler Chatwood had a rocky introduction to the game, hurling a wild pitch to plate Davis with the sixth Baltimore run. Reimold added to Chatwood's pain with a fly ball that scraped over the left field fence to make it 8-0. It was the 11th of the season, in just Nolan's 77th game. The Halos bullpen settled down after that, but it was too little too late.

Meanwhile, Hunter pitched his best game yet as an Oriole. The big righthander matched his season high with seven innings, allowing no runs on seven hits and two walks while striking out five. He was ably relieved in the eighth inning by Willie Eyre, who in turn was less ably relieved in the ninth by that goggle-wearing yutz Kevin Gregg. Though watching the so-called closer cough off three runs to the Angels' second-teamers (seven of the nine Anaheim starters were subbed out in the seventh) caused the game to end on a frustrating note, there was actually something perversely entertaining about booing and jeering him as he stumbled along.

So not a bad deal all in all. I got to spend a beautiful and leisurely evening with my favorite sibling watching our Birds stomp on the postseason hopes of the visiting team.
Posted by Kevin at 9:18 PM