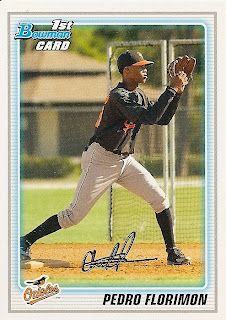 September can be an odd time for baseball, what with expanded major league rosters allowing teams to stock their benches and bullpens with prospects and minor league veterans alike, most wearing unusual uniform numbers in the 50s, 60s, and 70s. If you've been following the Orioles or another perennial loser in recent history, there's a good chance that you've mentally checked out by the time the season's final month rolls around. Suddenly you're looking up at the television and saying:

-"Who the heck is Chris Lambert?"

-"Ye gods, when did they sign Victor Zambrano, and why?"

-"Wait, they called up Pedro Florimon?"

That last thought crossed my mind yesterday afternoon, though I didn't say it out loud. I wouldn't want my cats to think I was weird or something. Pedro Florimon, Jr. is the son of Pedro Florimon, Sr., who is severely lacking in web presence. Pedro Junior signed with the Orioles as a teenager in 2004 and played rookie-level pro ball in his native Dominican Republic for a few years before splitting the 2006 season between Bluefield and Aberdeen. He hit .293 overall that year, the only full season in which he's topped .267. Overall, he's batted .247/.322/.354 in the minors, which has made the 24-year-old's inclusion on the 40-man roster for the last year a cause for consternation among some diehard O's fans. On September 6, shortly after active roster capacity expanded from 25 to 40, the Birds promoted Florimon to the majors. He was the only middle infielder they recalled, but they haven't been keen on penciling him into the lineup ahead of J. J. Hardy for obvious reasons.

Heading into yesterday afternoon's series finale in Detroit, Pedro had appeared in three whole games, starting once and going 0-for-5 overall with a sac bunt and four strikeouts. But Buck Showalter decided to sit all of his starters except for Vladimir Guerrero, Robert Andino, and Nolan Reimold, and so the rookie was in there at shortstop batting eighth. Even though the Orioles lost 10-6, Florimon should remember the game fondly. In the fifth inning, he hit a one-out double off of Brad Penny to drive in the team's first two runs of the game. He promptly scored the tying run on a Craig Tatum single. In the span of a few minutes, the young infielder had collected his first big league hit, extra-base hit, runs batted in, and run scored. In his next plate appearance, he walked - another first.

Sorry I forgot that you were on the roster, Pedro. Hope the veterans treated you to a nice dinner after you got back to Baltimore last night.
Posted by Kevin at 10:06 PM

i created his wikipedia article