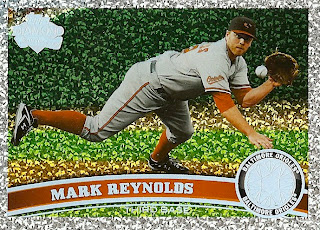 Yesterday I was finally able to get my hands on some long-overdue cards of the newer Orioles: Mark Reynolds, J. J. Hardy, Vladimir Guerrero. Sure, Reynolds is cheesily Photoshopped into an O's uniform here, with some telltale orange socks (the Birds wear black) and a Diamondbacks letter font on the back of his jersey. But this shiny parallel card is just so mesmerizing that I'm willing to forgive it. As it stands, Mark has given the Orioles just about what they should have expected: low average (.222), lots of strikeouts (a league-leading and team-record 190), a fair amount of walks (72), and a metric ton of home runs (37). With three games left to play, Reynolds has already hit the most homers by an Oriole since Albert Belle left the yard 37 times in 1999. It's part of a group effort that has seen Baltimore hitters swat 186 home runs, fourth-most in the American League and 51 more than their tenth-ranked total in 2010. It's not always fun watching this team, but it's rarely dull watching Mark Reynolds play.
Posted by Kevin at 8:40 PM

Who at Topps thought that the O's wear orange socks? I understand the photshopping of pictures but at least do the research and get the team colors correct! I really disturbed me when I first got this card.