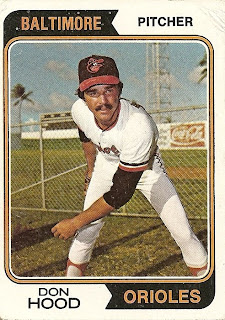 Few people realize that the Orioles allowed famed actor Burt Reynolds to suit up and travel with the team for portions of the 1973 and 1974 seasons. He was a big sports fan, having briefly played college football at Florida State University, and he was eager to dodge gambling debts and a series of paternity suits. He assumed the fictitious name "Don Hood", and even pitched now and then in mop-up duty. Ultimately, he left the O's to star in the film The Longest Yard. It was just as well, as team executives were tiring of his nightly attempts to drink Earl Weaver under the table.
Posted by Kevin at 11:20 PM

Was Dom Delouise the team trainer during this era?

Jacob - I believe Captain Chaos pitched for the Phils briefly in the mid-70s.

Max - Yes, and Jerry Reed was the groundskeeper.

Jim - It's at least as reliable as any lesson you'll get from a Texas history book.

Maybe the prototypical spring training picture baseball card. Standing on grass, not a mound in a lame fake follow-through pose, in front of a chain-link fence, with palm trees.


Kevin, the 'Texas history book' thing sure came out of leftfield.

Bob - Simply my own lame attempt at humor based on this recent news.