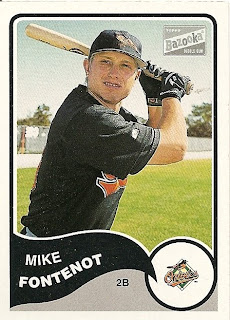 My collection of Orioles cards is getting pretty expansive, but it is nowhere near complete. I still accept blind trades for this reason, and also because I've been too lazy to compile a master checklist of all things Bawlmer. Just thinking about trying to catalogue every piece of cardboard from the last 57 years that has a little orange and black bird on it gives me the dizzies. So I thumb through the duplicates that my readers and cohorts are kind enough to send and get a simple little thrill whenever I see something unfamiliar. If it's a player who was previously unrepresented in my O's collection, well, that's an extra treat.

Last week, reader Ron sent a package that contained a goodly handful of new-to-me cards, including this little number. It's one of the select few cards featuring Mike Fontenot in a Birds uniform, and for good reason. Baltimore's first-round pick in 2001 climbed quickly through the organization, reaching AAA Ottawa in his third pro season. But the following February (2005, if you're keeping tabs), he was traded to the Cubs in the Sammy Sosa deal. He's been a regular in the Chicago infield since 2007, and seemed poised for stardom following a sophomore season in which he hit .305/.395/.514. However, his OPS plunged by 232 points last season. Time will tell whether the real Fontenot is the 2008 version, the 2009 version, or something in between.
Posted by Kevin at 10:31 PM

A few days ago I said I was going to stop watching them, since then I've proceeded to watch nearly every inning. This is partly because they did win two in a row so I was really hoping they could win the NYY series.

But now I really am taking a break. Even if I wanted to, I'm unable to watch tonight's or tomorrow's game. Like an addict, I need to be pulled away and it's for the better. It's not just frustrating anymore, it's downright depressing. Except for Wigginton, the offensive numbers are disgusting. Markakis is on pace to hit, what, 6 HRs and 25 RBI. Wieters hasn't hit one since opening day. Roberts is hurt, who knows when he'll be back and in what condition he'll be in when he gets here. Oh and we're paying these two big money over the next 4 & 6 years.

Because Oriole baseball is predetermined, you know that if and when those bats get hot the starting pitching will go right out the window and we'll be losing 10-8 instead of 3-2. Can't wait.

I hear there is another Free The Birds event in the works, couldn't come at a better time.

If you are truly in need of O's checklists, it just happens that I have put together such a checklist. It took me a while, but I finally finished it. Contact me through email and I can tell you more about it if you are interested. I would gladly send it to you.

FTB - I'm starting to wonder if the O's sensed your frustration and used it as inspiration!