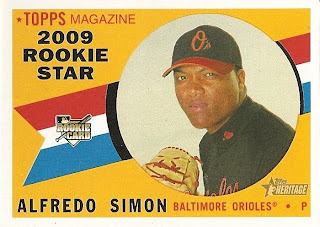 It only took three weeks for the Orioles to put together back-to-back wins for the first time in 2010. Naturally when it happened, they did it against the Red Sox and Yankees...not that it came easily. Both games featured two-run rallies by the opponent in their final at-bat, with the final out being a bang-bang play with the tying and winning runs on base. Each game also figured a member of the motley Baltimore bullpen earning his first career save. Sunday's fireman was sidearmer Cla "the Claw" Meredith, who had never saved a game in five-plus seasons. Tonight the door was slammed by flame-throwing lefty Alfredo Simon, who was 24 hours removed from AAA Norfolk, a year removed from Tommy John elbow surgery, and two years removed from the Mexican league. Not only had he never had a major league save (he was originally signed by the Phillies and didn't debut in the majors until September 2008 with the O's), he hadn't saved a game anywhere since 2005 at AA Norwich. All he had to do was strike out Curtis Granderson and Derek Jeter, overcome a rare error by Gold Glover Cesar Izturis, and induce Alex Rodriguez to ground out and strand two runners.

Whenever I hear the words "Mexican League" I always immediately think of the beginning of "Major League" when Taylor is drunk in the sombrero answering the phone call from the Indians GM. I always imagine that any player who once played in the Mexican League has a moment like this when some big league club calls. I can just hear Alfredo Simon saying: "Is that you, Tolbert? Look, I'm hung over, my knees are killing me and if you're going to pull this shit at least you could've said you were from the Yankees."

Max - For my part, I assume that he played with Fernando Valenzuela.