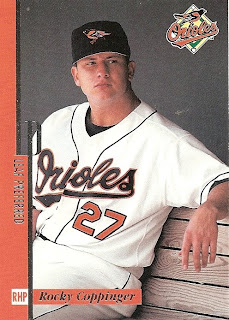 Did you ever have one of those days where you're just restless? Today I just feel like a caged animal. I wanted to be anywhere but where I was. The day seemed to crawl by, and I would have much rather been at the beach, or my family's lakeside cottage, or off with my friends somewhere. I had an urge to plunge headlong into something productive, like working on my new house. I had a dangerous notion to spend some money - baseball card binge, anyone? My mind was working a mile a minute, but not in any particular direction.

Naturally, the day just crawled by.

That's a one-off Tuesday in April for you. The weather is getting nice, but vacation season is still five or six weeks away. There aren't any holidays to offer a day's reprieve, and I can't get into my house this week because the floors are drying after being stained. I can't exactly lose myself in the Orioles - not when they're 2-12 and their current series in Seattle brings 10 PM start times - and the NFL Draft won't be filling the void until Thursday night.

Like Rocky Coppinger, I'm just waiting to be called into the game.
Posted by Kevin at 11:04 PM

(I know you weren't)

Oh Rocky, whatever happened to you? Your rookie season showed much promise, but it was all downhill from there...

That is a blah picture for a "preferred" card.

Ryan - Sadly, sometimes a set name is just a name.