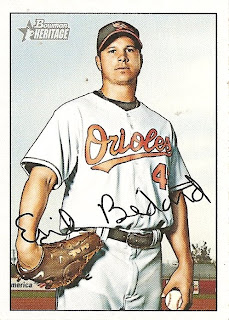 Since the Orioles (and their opponents, the Rays) are the only team that has to wait until Tuesday to start their season, I have the opportunity to wander into non-pertinent matters today. Translation: it’s time for show-and-tell. While the Erik Bedard retro-lookin' card I've chosen is pretty nifty, there's nothing quite like the real thing. Let's talk about old cards.

A quick pointer for any hobby shop owners (or even future hobby shop owners) who might happen upon this blog post: if you want your shop to be a must-stop destination for collectors, you’ve got to have a cheap vintage bin. This is one of the things that you can provide to set yourself apart from the Wal-marts and Targets of the world that deal only in current product and the eBays and Check Out My Cardses with their shipping charges and delayed gratification.

Saturday afternoon I stopped in to the Baseball Card Outlet, which may just be the best hobby shop I’ve ever visited. It was my third time there, and I sought out the vintage bargain bins that I’d inexplicably overlooked in my previous trips. What I found was sheer joy. They have several different bins with progressive pricing tiers: 50 cents per card, a dollar per card, and two dollars per card. There may have been others, but I was focused on thrift. There’s even a bulk discount – the 50 cent cards are 25 for $10, the dollar cards are 25 for $20, and so forth. I started out rifling through the cheapest bin and selected a dozen cards before I decided to focus my efforts on the dollar cards. I limited myself to 25 of those so as to keep myself on a $30 budget, but I easily could have bought them out with a little less discipline. My total haul was 37 cards ranging from 1954 to 1964 (except for one 1972 Topps league leaders card), all for $27.50. Many would be considered “common” players, but you can’t beat the price considering the condition of the cards. Most are off-center, creased, and/or rounded on the corners, but they’re pretty decent for 50-to-60-year-old bits of cardboard. Yes, please.

I could easily bore you with a blow-by-blow account of my purchase, but instead I’ll go back to the 6-in-Thirty well and highlight a half-dozen of the new additions to my collection. Enjoy! First we have Clint Courtney on the classic 1955 Bowman design, card number 34. Though he’s a member of the White Sox here, he has a special place in my heart as the first catcher in Orioles history. He’s also one of the all-time great characters of the game, the rare bespectacled backstop and a notorious fighter (hence his “Scrap Iron” nickname) and flake. 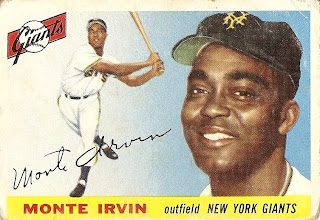 1955 Topps Monte Irvin #100. This is probably the most beat-up of the bunch, as the corners are practically non-existent. If that’s what it takes to get an ex-Negro Leaguer and a Hall of Famer for less than a buck, sign me up. This is also the first vintage New York Giant in my collection. 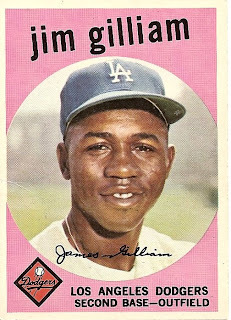 Speaking of former Negro Leaguers, here’s Dodger great Jim “Junior” Gilliam on his 1959 Topps card #306. I grabbed him because of his Baltimore ties; he was a three-time All-Star as a member of the Elite Giants and a member of their championship club in 1949. Other notable Elite Giants included his future Dodger teammates Roy Campanella and Joe Black. Junior was also a two-time National League All-Star and the 1953 Rookie of the Year. 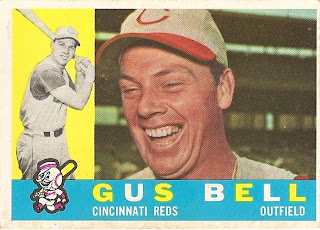 This is immediately one of my favorite cards in my entire collection, a 1960 Topps Gus Bell #235. Sure, he’s the progenitor of the second-ever three-generation MLB family (which includes son Buddy Bell and grandson David Bell) and a star outfielder. But most importantly, look how happy he is! Gotta love the rarity of a candidly-photographed laugh on an old card. 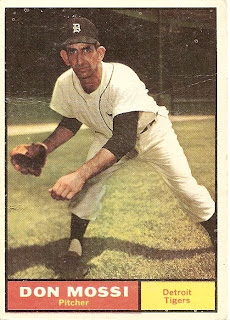 One of my longtime sources of shame as a collector has been the lack of Don Mossi in my boxes and binders. He’s widely regarded as the ugliest player in baseball history, a man who makes Andy Etchebarren look like George Clooney. He was described in Ball Four as looking like a cab driving down the street with its doors open, and Bill James declared that he was “five-tool ugly”. I still need to supplement his 1961 Topps #14 with one of his other cards that actually shows his aesthetic gifts close-up. But this is a fine start. 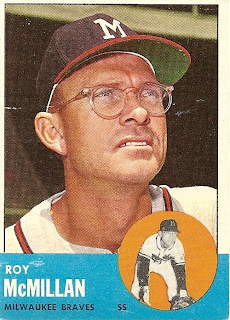 Finally we have Roy McMillan’s 1963 Topps #156. Not much to say about this one. I already have Roy’s 1965 card depicting him as a Met, so this fills a need in the “one-player-multiple-teams” category. Other than that, I just dig his clear-framed glasses. Eat your heart out, Chris Sabo.

Well, I hope you got a kick out of seeing some moldy oldies. Every time I add cards like these to my collection, I realize that I’m having much more fun than I do when I buy the overpriced, gimmicky new stuff. Maybe if I put it down in writing enough times, I’ll be able to hammer the message home and resist those soon-forgotten impulse buys in Target.
Posted by Kevin at 9:19 PM

Very cool, I really like these older cards, especially the Mossi.

That Gus Bell card is a real gem.

my 1964 mossi is jealous of your 60 bell, as not only are his ears there for the mocking, he is making one of the saddest faces ever captured on cardboard.

his 1966 isn't much better; he looks like he is passing a kidney stone:

Kevin, did you ever find that email I sent regarding a group of older cards I thought you might be interested in?

Bob - It's certainly miles better than the dozen or so Buddy Bell cards cluttering up my binders.

Craig - Just wrote you back. Sorry about the lag time!

is this the first time you featured cards from other teams on this blog??

deal - Actually, no. Off the top of my head, I've done at least two others. There was this post, with a cameo from Carlton Fisk, and this one, another vintage show and tell.

I think Nick Johnson is going to take Mossi's crown for ugliest of all time. I don't remember him being so ugly before, but now that he's back on the Yankees I can't even look at him when he's at bat. He has a lumpy face and looks like he's about to barf. He's a lot uglier than a guy who just has big ears.

PLUS, he's a Yankee!