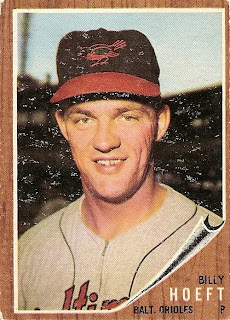 Continued from last week, I'm paying tribute to another Oriole pitcher who has passed away in 2010. Billy Hoeft was only 20 years old when he debuted with the Tigers in 1952, and his learning curve was a bit steep. He went 18-36 with a 4.61 ERA in his first three seasons. However, he did show signs of greater things to come, completing 20 of his 62 starts and even leading the American League in strikeout-to-walk ratio with a 1.93 figure in 1954. The following season would prove to be his greatest, as he was an All-Star on the strength of a 16-7 record and a 2.99 ERA. He led Detroit pitchers in practically every statistical category, including 17 complete games, a 1.19 WHIP, and an A.L.-best seven shutouts. He won 20 games and completed 18 in 1956, but his ERA swelled to 4.06. Within three years he would be shifted to the bullpen, an indignity for a once-great starting pitcher in those days.

Billy spent three-plus years with the Orioles (1959-1962) and wasn't consistently effective, posting an ERA below 4.34 in just one of those seasons. But in that one season (1961) he excelled. Starting a dozen games and relieving in 23 others, he went 7-4 with three saves and a 2.02 ERA and 1.17 WHIP. He posted the best earned run average on the Baltimore staff and allowed only seven homers in 138 innings in a year when balls were flying out of the park at a considerable rate. In a 14-game span from June 27 through August 23, he allowed three earned runs in 37.1 innings - an 0.72 ERA! - and went 3-0 with all three of his saves. Hoeft even one-hit the Senators on August 19; it was the final whitewash of his career.

After the Orioles traded Billy, he bounced around the National League for four more seasons before retiring at age 34. In 15 seasons he was 97-101 with a 3.94 ERA. According to Baseball-Reference.com, he sold printing equipment for over thirty years and succumbed to cancer on March 16 at age 77. He is survived by four children, four grandchildren, two siblings, and his widow Margie, whom he met in Lakeland, FL during Spring Training 54 years ago.
Posted by Kevin at 1:08 PM

Bob - Very sad. I read an article about Cuellar's failing health on Thursday and considered switching Friday's subject. Instead, I'll get to him today.