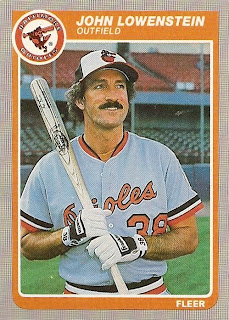 If you take a look at baseball's record books, one thing you'll find is that the Orioles have cornered the market on Montana's greatest players. There have only been 21 players in major league history who have hailed from the Treasure State, and four of them have worn a Baltimore uniform.

John Lowenstein is far and away the leading home run hitter among Montanians (Montanites?) with 116. 1950s first baseman Ed Bouchee, with 61, is the only other native of Big Sky Country in double digits. Number three on the longball list is...

Pitcher Dave McNally. In addition to his nine homers, he is the blowout victory leader from Montana with 184 wins. In a distant second is fellow ex-Oriole Jeff Ballard, with 41. Both were born in Billings.

The other Baltimore-Montana connection is current hard-throwing reliever Kam Mickolio, who is in his third season with the Birds. He hasn't done much in the bigs just yet, but many think he has the stuff to be a closer in the future. If he wants something to shoot for, he needs only seven saves to surpass 1920s pitcher Johnny Couch as the leading fireman from his home state.

This has been Useless Tidbits with Kevin B. Please drive safely.
Posted by Kevin at 9:09 PM

Lowenstein may lead in home runs, but Bouchee has the market cornered on indecent exposure.

Oh. Wow. Sounds like he paved the way for the David Cones and Ben Roethlisbergers of the world.

Tonight, tonight, let it be Lowenstein