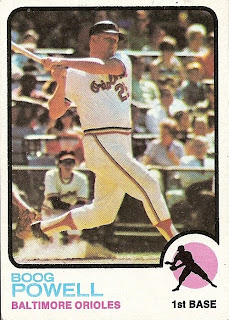 Life is full of funny coincidences. Just last week, I was paging through my vintage Orioles binder and I came across this card. In my experience, there aren't many cards with such clear views of the batboy. I found myself wondering who he might be, especially since he also appeared on Don Baylor's card in the same position.

A few days later, my high school's alumni magazine arrived, and as I flipped through it I saw this Boog Powell card looking back at me. As luck would have it, the batboy was one Neil Cashen, 1972 graduate of Archbishop Curley High. Though he is the nephew of Frank Cashen (who was the team's general manager at the time), Neil's employment with the O's began in 1968 when he befriended clubhouse attendant Ernie Tyler's son. He spent four seasons as the visiting team batboy at Memorial Stadium before switching to the Birds' bench in 1972 and staying through 1974. His tenure coincided with five trips to the playoffs by the Orioles, three World Series appearances, and one world championship. He met baseball greats from Mickey Mantle to Roberto Clemente. He even performed odd jobs for the hometown players, including landscaping work for his idol Jim Palmer and a cross-country escort of Doug DeCinces' car from Baltimore to California. Not bad work if you can get it!

If you're curious, Neil spent 27 years climbing the ladder at PHH, a large fleet management company. He eventually attained the position of chief financial officer, and retired in 2007. He is now consulting and managing his personal investments, and also serves as chair of Curley's school board. That's all pretty impressive, but does it measure up to appearing on baseball cards as a teenager?
Posted by Kevin at 10:59 PM

You are an encyclopedia. And we are bowing in your wake.

William - Aw, shucks. I got a major assist from the Curley magazine here.