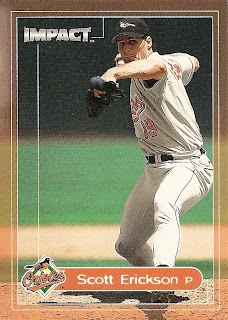 Assuming that the Orioles are on the bullet train to nowhere this season, I hope they're at least going to throw us a few bones. A no-hitter would be nice. The Milacki-Flanagan-Williamson-Olson no-no against Oakland in 1991 was the last for the team, but an O's pitcher hasn't turned in a complete hitless game since Jim Palmer dominated the A's four decades ago. Then again, if Kevin Millwood couldn't get the job done yesterday, it's probably not going to happen.

Yesterday was April 27 (as you were probably aware). Throughout major league history there have been six no-hitters thrown on that date, one of them by Millwood himself back in 2003 with the Phillies. Coincidentally, he was one of three pitchers to toss an April 27 no-hitter who have ties to the Orioles. In 1968, Charm City native Tom Phoebus shut down the Red Sox in a 6-0 O's win. Scott Erickson performed the feat in 1994, one season before suiting up in orange and black.

Well, it could be worse. The Mets have famously never been on the right side of a no-hitter; Nolan Ryan tossed a record seven of them after New York traded him. The way this season has gone so far, I should probably just keep my fingers crossed that the Birds don't get zeroed by an opposing pitcher.

EDIT: I just clicked over to Twitter and saw that O's farmhand Chris Tillman pitched a no-hitter for AAA Norfolk tonight. How about that?
Posted by Kevin at 11:17 PM

Great post Kevin, its funny how things like this happen. Make a post next time about the time the Orioles last won a series and maybe that will come true too! I made a post about Tillman on my brand new blog to commemorate the occasion. Hopefully we see him in the bigs this year. Check out my blog if you have some time. I need all the traffic to it I can get right now. Take care!

Ryan - Ah, reverse psychology. Like the time Frank Walker actually made a good play for the Ravens...

Now, now, Kevin, don't be hatin' on the more successful team in town. My only hope is the Ravens don't end up with more wins this year than the O's.

Tim - I'm not a Ravens basher, but Walker is that stray kernel of popcorn that gets stuck between your teeth. Here we are halfway through the offseason and the Ravens are in need of healthy CBs, and guess who's still unsigned? He will be back in 2010. Mark my words.